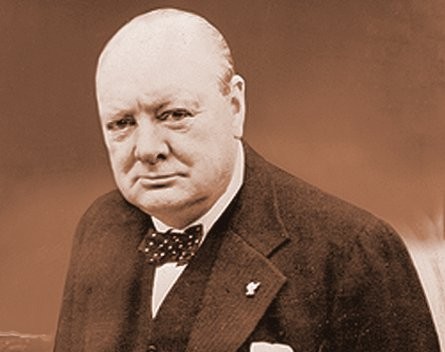 British wartime Prime Minister Winston Churchill has topped a list of leaders most admired by chief executives, beating Steve Jobs and Mahatma Gandhi for the top spot, according to a survey of CEOs released last week.

The finding comes out of accountancy PricewaterhouseCoopers’ 16th annual global CEO survey, which in January asked 1,400 CEOs from 60 countries what leaders they most admired.

There were not many CEOs in the list of leaders that CEOs admire the most. Over half (60%) chose a politician or military leader. After that, the most popular categories were business leaders and historical leaders.

Winston Churchill’s appeal was particularly wide. In France, he beat out home-grown president Charles de Gaulle for the top spot, and he also trumped Niccolo Machiavelli to come first in Italy. He managed a tie for second with Gandhi in Turkey, coming just behind wartime leader and national founding father Mustafa Kemal Ataturk. He was the most-admired leader in Latin America, Australia, the United States and Canada.

1. Stick to your convictions

In the 1930s, as Hitler came to power in Germany, few sought a repeat of World War I. British politicians followed a policy of ‘appeasement’ instead.

Churchill was one of the few to consistently warn about the danger of a rearmed Germany, and continued to do so even as it led to his being ostracised. Often portrayed in retrospect as a prophetic voice in the wilderness, Churchill was proved right by the German invasion of Poland in 1939.

Churchill’s convictions came at great personal cost to him. In his 1948 book, The Gathering Storm, he reflected: “I felt a sensation of despair. To be so entirely… convinced and vindicated in a matter of life and death to one’s country, and not to be able to make Parliament and the nation heed the warning, or bow to the proof by taking action, was an experience most painful.”

Churchill is famous for his sheer belligerence in goading his countrymen to stand up to Germany, even as Britain was being bombed.

“Churchill’s supreme talent,” one of his aides recalled, “was in goading people into giving up their cherished reasons for not doing anything at all.”

For example, when informed of delays in shipbuilding in 1939, Churchill sent out a memorandum to one of his senior administrators: “It is no use the contractors saying it cannot be done. I have seen it done when full pressure is applied, and every resource and contrivance utilised.”

If anyone should be forgiven a moment of despair, it would be the British Prime Minister in the midst of the war with Hitler. In the early years of the war, it certainly looked like Germany would succeed.

European countries were falling in rapid succession and Britain was being continually bombed, with many of its people forced to flee the cities. It wasn’t until Hitler besieged Russia that things began to go awry for him. Despite this, Churchill maintained a positive attitude with his subordinates.

“It is a crime to despair,” he wrote after the signing of the Munich Agreement, which allowed Germany to occupy part of Czechoslovakia in 1938. “It is the hour, not for despair, but for courage and rebuilding; and that is the spirit which should rule us in this hour.”

This was in keeping with the general structure he established in his earlier speeches. Churchill never ended without a call for optimism, often delivered in a bit of English poetry.

Churchill wasn’t one to sugar-coat the truth. He always spoke of the dire threat to Britain should Hitler succeed. But this urgency was never intended to induce helplessness.

“All will come right,” he frequently said. In the war’s darkest hours, he gave Britain courage. Perhaps that’s why he’s so universally admired by global CEOs today.

This story first appeared on LeadingCompany.