Women in tech must ‘lean in’: Professor Gillian Triggs 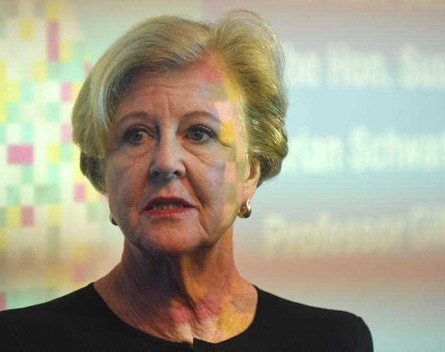 Work should be about tasks accomplished rather than time spent in the office, according to Professor Gillian Triggs. But while that’s a culture she instills as President of the Human Rights Commission, it’s not always one she’s worked in herself.

“When I was working in a law firm, I’d sometimes put a file under my arm and go out to the lift, pretending I was off to see a client,” she told Women at a VCE event in Sydney yesterday, supporting women in technology. “Really I was off to pick the kids up from school!”

Triggs made the comment in response to an audience member who recalled the most powerful thing she witnessed working in tech in the 1990s: her male boss regularly leaving early to get home to his children. Role modelling, many in the audience agreed, is essential for encouraging true workplace flexibility.

But it’s equally important that women do what Sheryl Sandberg has advised and ‘lean in’, according to Triggs.

“In my experience, leaning in — stepping up, putting your hand out — is absolutely vital for women,” she said. “You’ve got to lean in. Women have to take the risk. There’s no point being a victim or complaining.”

Triggs used the session to address the shortage of women in technology. Noting that just 16% of technology graduates are female and women comprise just 24% of Australia’s tech workforce, according to ABS figures, Triggs called it a “curious phenomenon” that is ultimately hurting the industry’s competitiveness.

She believes we need powerful female role models to showcase the work they’re doing in technology, and programs that reach into the education system to encourage more girls to study maths and science. “There does appear to be a strong correlation between early attitudes towards maths and science and a propensity to pursue a career in tech,” she said. The expectations of what careers are possible start early: A 2006 OECD survey of 15 years old found that 46% of boys had career expectations to study computer science compared to just 8% of girls.

Still, Triggs warned against believing a pipeline of women with tech-related degrees will solve the problem. Having graduated from law in the 1960s, she said that these were problems she thought would be fixed. Seeing many women with similar degrees, she never imagined the legal profession would still have a serious shortage of women in leadership in 2015. Law’s a great example of where the much promised pipeline has failed to deliver change at the top.

Hence the need to change workplace culture — particularly to move away from associating success with time spent at the office. Triggs believes the tech sector must look to offer real career flexibility options, and have senior leaders encourage the behaviour. Mentoring and coaching programs for women will also help — anything that better encourages women to ‘lean in’.