Techfugees hackathon is “pretty much a first” 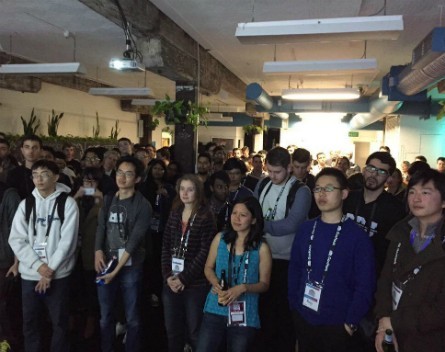 Sydney’s tech community will come together for a special event aiming to come up with innovative ways to help refugees settle in Australia.

The Techfugees hackathon, inspired by a similar movement in Europe, will be a weekend-long hackathon aiming to bring together founders, entrepreneurs, investors and refugees to create new solutions to the refugee crisis.

It’ll be held in Western Sydney from November 28-29 and is sponsored by Settlement Services International (SSI), the largest not-for-profit humanitarian settlement organisation in Australia, and STARTTS, a not-for-profit providing psychological and counselling support for refugees in the country.

The event will be hosted by the Liverpool City Council and is being organised by Anne-Marie Elias, muru-D’s Annie Parker and LanzaTech’s Nicole Williamson.

Elias says it’s about showing the refugee community that those in tech care about them, and finding solutions quickly.

“We want to put these people together and make something really meaningful to show refugees that there’s a wider community that actually gives a shit about them and how they settle here, and that want to make it as comfortable as we can,” Elias tells StartupSmart.

“They want to help, they want to roll up their sleeves and not wait for the government. They want to get out there and do it.

“It’s so heart-warming and incredible. No-one has taken the piss; no-one has uttered a word against it. People are excited.”

At the event, refugees from Sydney will be presenting to the participants, detailing the difficulties of settling in Australia and presenting some challenges.

“Instead of us pitching the idea, we’re getting the refugees pitching the problems and collaborating to find the solutions,” Elias says.

“It’s pretty much a first.”

“It’s about talking to refugees that are already here about what kinds of things have made their lives easier and better, and what’s enabled them to settle easier into Australian society.

“We’re dealing with the refugees that are here, we’re not weighing into any political argument. It’s about asking once they’re here, how do we support them?”

From there it’ll function like a traditional hackathon, with teams forming to solve the various issues, and eventually the final ideas will be presented to the judges.

The problems the tech people will be trying to assist with will include language acquisition, connecting with the community, housing support, and finding employees.

Coming up with sustainable solutions

Elias wants to make sure the entrepreneurs actually follow through with their ideas.

“One of the things with hackathons that I get really frustrated with is that nothing really lands,” she says.

“We’ve approached SSI and they’re sponsoring the prize, which is incubation to launch the winning idea. We’re trying to build in a mechanism which includes the end user from the start, rather than just appearing in the journey.”

It’s also about finding tech-savvy and qualified refugees and encouraging them to get involved in Sydney’s startup ecosystem, she says.

“We always want to find programmers and developers among refugees and bring them in,” she says.

“If they want to have that career here there’s no reason they can’t if they have these networks – that’s the main problem. They’re highly qualified but they have no networks.”

Elias worked for 30 years in the social services sector before attending her first tech hackathon last year. She says it was inspiring to see the community come together and produce results quicker than what she was used to.

“We were really shit at doing anything different – a lot of money was thrown at various issues but the results keep getting worse,” she says.

“Then there I was sitting in a room with people volunteering for the entire weekend, looking at completely new data sets and creating things in 48 hours. That blew me away.

“I kept thinking about how to get the government more into this space to see what we can do to produce meaningful results.

“It’s really awesome because I come from a different world. I’m trying to bring two worlds together so we can access this community of people to solve really big problems without it all being about the money.”

For Elias, the inaugural Techfugees hackathon next month is just the beginning.

“It’ll be the first of a series of social hacks,” she says.

“The people that are charged with fixing these problems are failing, rapidly. We’re seeing more socially-engineered, fantastic solutions from these hackathons than from the government.”