Will GoFar: Turnbull put money where mouth is with Kickstarter purchase 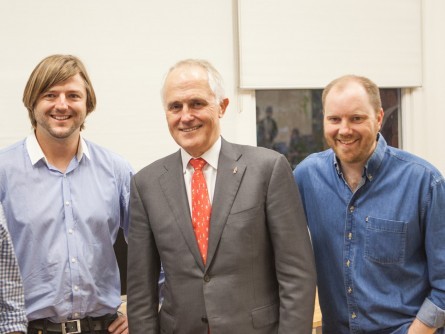 New Prime Minister Malcolm Turnbull is willing to walk-the-walk in terms of startups, according to GoFar co-founder Ian Davidson.

Davidson has firsthand experience of this, after the future-PM contributed to the startup’s Kickstarter campaign in May.

While much of the Australian startup community is regarding Turnbull’s rise to the top job as a positive move, we’re still waiting to see whether he’ll actually back the sector beyond using words like “agile” and “disruption” in his first speech.

But Davidson says he’s seen that Turnbull is able to put his money where his mouth is, after he paid a visit to Sydney co-working space Fishburners.

“He happened to come in when we were doing our Kickstarter campaign,” Davidson says.

“We explained the device, and then we asked him if he wanted to buy one and he said ‘yes I do’.”

“He cracked open his wallet and got it done.”

What Turnbull purchased is an in-car display and smartphone app that aims to help ensure drivers make safe and smart decision behind the wheel, although he probably won’t be driving himself very much for the foreseeable future.

The Kickstarter campaign eventually raised more than $200,000, four times what it was asking for.

Davidson says it’s encouraging to now have a PM that “gets startups” and is willing to invest in them.

“Malcolm didn’t take much persuasion to put his hand in his pocket to buy a unit,” he says.

“It’s nice to see a politician go that extra step and really put the support down.”

“He seems to get it, it’s his world. It’s his comfort zone.”

Fishburners co-founder Murray Hurps agrees, saying Turnbull’s contribution to GoFar was the highlight of his visit.

“I’ve had the pleasure of giving tours of Fishburners to some very impressive business people, but Malcolm honestly asked some of the best questions I’ve heard being asked, and seemed to genuinely understand what our 151 startups are challenged with,” Hurps says.

“If you think the startup world is unstable, compared to being PM it looks like a job for life,” he says.

“Malcolm put his money where his mouth is and bought a GoFar device and now just a few months later he’s prime minister.

“I don’t know if everyone who buys GoFar will become PM but statistically it is trending in that direction.”