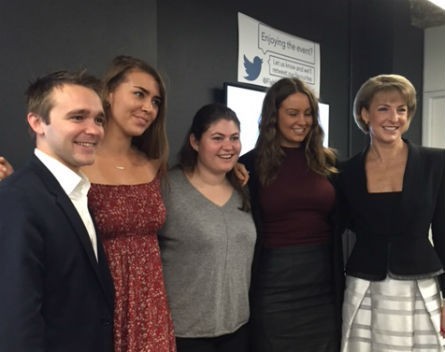 Giving female founders a platform from which to be heard, and in turn inspire, is important in helping address the gender gap in tech, according to Assistant Minister for Innovation Wyatt Roy.

Roy, Minister for Women Michaelia Cash, and former City of Sydney mayor, and Australian Technology Park board member Lucy Turnbull, attended a Women in Innovation breakfast at Fishburners on Friday morning, but they were there to listen, not speak, LanzaTech Australia head Nicole Williamson says.

“Wyatt Roy and Michaelia Cash made a point of saying, ‘we’re not here to talk, we’re here to listen’,” Williamson says.

“They weren’t bullshitting – they sat and listened for the hour and a half.”

Giving the rock stars the spotlight

The event aimed to unpack how women have successfully made their mark in the startup world, the unique challenges that they currently face, and what needs to be done to reach gender equality in the area.

Speaking was a trio of female founders: Gen George from OneShift, Nikki Durkin from 99Dresses and Jess Wilson from Stashd.

Roy tells StartupSmart it was an “incredibly inspiring” event.

“It was a fantastic panel and I hope a lot of young girls want to be like them when they grow up,” Roy says.

“We want our incredible female founders to be the rock stars they deserve, and to be the inspiration for the next generation.”

With the increased attention paid to startups and innovation in the political sphere, it’s important that the gender gap is addressed, according to Roy.

“To achieve the prosperity that we need to have, we need to utilise 100% of the population, not 50%,” he says.

“There needs to be greater co-operation within the ecosystem and we need to grow that talent pool from an early age.

“We have to get that entrepreneurial spirit into young women especially.”

The discussion ranged from the challenges the founders had to overcome, the barriers that are still in place, and how the government can assist with this problem.

“It included advice for women about how to have the confidence to put themselves forward even when they’re not 100% confident,” Williamson says.

“It’s not about networking, it’s about connecting. It’s not pushing yourself forward, it’s about how we can help each other.”

Event organiser Anne-Marie Elias says those gathered were able to show the government there are many talented women working in tech who are willing to share their stories when given the opportunity.

“It was a really good mix of people at various stages of growth,” she says.

“There were very new startups and people that have been very successful. It gave the ministers a really good snapshot of the different stages of startups.”

Roy says events like this that bring attention to the work female founders are already doing are very important.

“Just talking about it is a starting point,” he says.

“We can act as a partner with the private sector and broader elements of society. We should be looking at the policy options to achieve that gender equality.”

There were a number of suggestions put forward by the panel as ways to close this gender gap.

“We’ve got to start in schools,” Elias says.

“For women it’s about getting those networks. They’re really struggling to have networks fort finance, and catching up with the private sector.

“The three female founders on the panel all had to go overseas at one point – for finance or inspiration – and that’s really sad. We need to keep those businesses here.”

It was also about showing these female founders that they can communicate with the government and express the issues they are facing, Elias says.

“It’s very early days but one of the lines was that the doors in Canberra are open,” she says.

“It’s really important for women entrepreneurs to actually understand that they’re not unreachable.”

Buzzy Tasks founder Lauren Trlin attended the event and says there was a “really good energy” in the room.

“It was an inspiring morning,” Trlin says.

“For me being a female founder I feel like there’s a tipping point coming. It’s an exciting moment for us.

“A few of us are getting to a point where amazing things are going to start happening, and it’s good to see that politicians are aware of that.

“To be in a room full of inspiring women is mind-blowing to me.”

It’s an exciting time to be involved with the startup sector, Williamson says, and there are positive signs that the gender gap in tech will be addressed.

“We’re in a place right now where it feels like change is happening and it’s happening at a startup speed not a dinosaur speed,” she says.

Trlin agrees, and says more female founders need to be shown as the role models that they are.

“Not only do we need mentors, we need to be mentors,” she says.