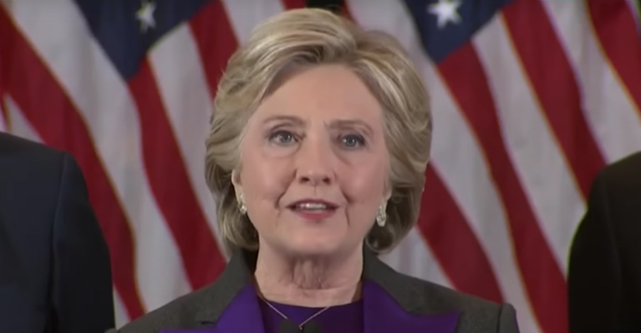 Hillary Clinton told her supporters to continue fighting for what’s right and urged girls to take every opportunity to achieve their own dreams, during her concession speech overnight.

She said that while the “highest and hardest” of glass ceilings was not shattered, another woman will do it, someday.

And while the loss hurt, she said it’s worth it.

And to all of the little girls who are watching this, never doubt that you are valuable and powerful and deserving of every chance and opportunity in the world to pursue and achieve your own dreams.”

Clinton said she congratulated Donald Trump and offered to work with him on behalf of the country.

“I hope that he will be a successful president for all Americans,” she said.”Donald Trump is going to be our president. We owe him an open mind and the chance to lead.”

She said the campaign was never about “one person or even one election” but rather about building a “country we love and about building an America that’s hopeful, inclusive and big hearted.”

“And breaking down all the barriers that hold any American back from achieving their dreams. We spent a year and a half bringing together millions of people from every corner of our country to say with one voice that we believe that the American dream is big enough for everyone.”

She said it’s for everyone. “For people of all races, and religions, for men and women, for immigrants, for LGBT people, and people with disabilities,” she said. “I want everybody coming out from behind that and make sure your voices are heard going forward.

“And so we need — we need you to keep up these fights now and for the rest of your lives. And to all the women, and especially the young women, who put their faith in this campaign and in me: I want you to know that nothing has made me prouder than to be your champion.”