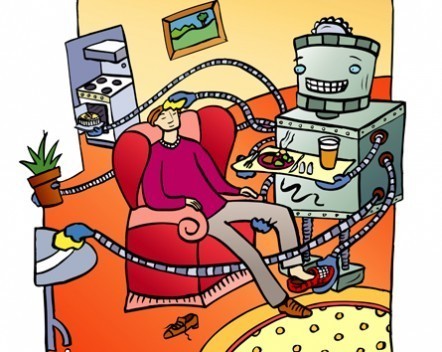 Not enough entrepreneurs are creating solutions for people who aren’t young and single, according to futurist Ben Hammersley.

“I think there’s a huge opportunity to address the needs of an early thirties stay-at-home mother,” he says.

“Or the time-poor forty-something guy who wants to spend his weekends with his 10-year-old rather than mowing the lawn.

“One of the notable trends in San Francisco startups at the moment, and once you’ve noticed you can’t stop seeing it, so many new startups are effectively replacing the mothers the founders left at home.

“20-something dudes who‘ve just dropped out of college, and they can’t boil water and make their own bed. So that’s the market they see. There are so many food delivery startups, shopping delivery startups, getting people to clean your house.

“It’s not their fault they’re young and self-absorbed. I think it’s a massively missed opportunity.”

Hammersley, an author, and former deputy editor of Wired, who’s speaking at Wired for Wonder in Melbourne later this month, is currently living in Los Angeles with his partner and 11-month old daughter, and a host of different types of AI. Not truly sentient AI, but between five and 10 really clever internet-connected devices.

It’s part of an investigation into the ways people will interact with robots as they become an increasingly large part of home life. Hamersley has noticed some of the technology hasn’t been designed with a family in mind, like Amazon’s virtual assistant Echo.

“It’s very interesting seeing how my 11-month-old baby daughter reacts to these sorts of devices, and thinking through the way you as a parent interact with AI in your home, when you’re doing so in front of a child,” he says.

“A good example is the Amazon Echo, that I have in the kitchen. It doesn’t react to you when you say ‘thank you’. You end up being quite rude to it. But you’d never be rude to a waitress in front of your child.

“You’re dealing them in a social context, and a family context, which is different from being a single male technologist in San Francisco.”

It’s natural for entrepreneurs to found, or for investors to fund, startups that are solving problems they’re familiar with, one of many reasons why diversity is important.

Hammersley points to the limitations of Fitbit and Apple’s Health Kit as symptoms of an industry dominated by males.

“The Jawbone or the Fitbit are basically midlife crisis’ being made into electronic devices. The particular type of fitness (they promote)is effectively preventing middle-aged men from heart attacks,” he says.

“It’s only in the upcoming version of iOS that Apple Health, which was unveiled with great fanfare, has a period tracker in it, a thing of great importance to half the population.

“It’s a slightly weird, shocking omission. There’s missed opportunity in these massive markets, and we’re not talking about taking a Fibit, shrinking it and pinking it.

“It’s a real problem for society and the startup scene which are missing out on enormous amounts of potential. And I think creating a social backlash in many cities.

“The local pollies will no longer be awed by having a startup community in their city because they’ll say ‘you’re not helping out anyone other than yourselves.”