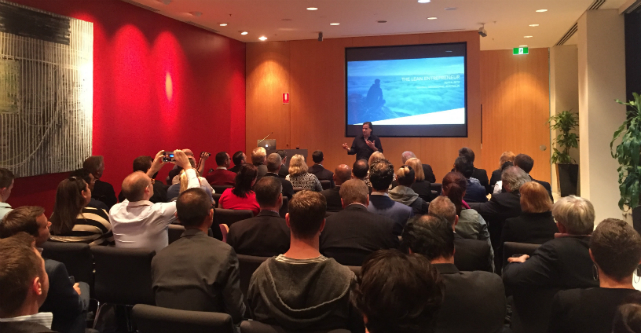 According to New York Times best-selling author and lean startup pioneer Brant Cooper, there’s one thing that startup founders need to be constantly doing above all else: Hustling.

Cooper, who wrote the Lean Entrepreneur with Patrick Vlaskovits, says this isn’t just about being constantly busy –  it’s about figuring out what is going to have the best impact on the startup and actually going out there and doing it.

If this means you have to knock on people’s doors to find customers and make deals then he says you should be out there doing it right now.

“I think a lot of entrepreneurs are looking too quickly to how do I scale this and how do I automate my awareness of customer acquisition when really they should just be out hustling,” Cooper tells StartupSmart.

“It’s finding the first 10 to 20 people that really care about the products you’re building.”

Cooper, who is visiting Melbourne for an exclusive event with Venturetec and LaunchVic, is now the founder and CEO of Moves the Needle, which takes the lean startup model into larger organisations,

“We sort of lead the market leaders in bringing innovation practices into large enterprises,” he says.

“We had a really great year and we’re trying to keep that growth rate going,” Cooper says.

The challenge in making capital more readily available is that there needs to be more startups making their own money in the ecosystem beforehand, he says.

“Most ecosystems suffer from that because investment follows return,” Cooper says.

“If ecosystems don’t have a track record of exit of returning in massive amounts of money to investors then that’s why there’s not a lot of investment capital flowing.”

For startups working their way to this stage, he says the founders need to be building strong businesses and should try the likes of 500 Startups founder Dave McClure, who actively invests in ecosystems around the world, when searching for external funding.

“Hopefully you get an exit out of that and that’s what starts the flow of money come from local resources,” Cooper says.

While he has only been to Australia a few times, Cooper says Melbourne is ahead of many other cities because it has an urban centre that draws people in.

“That’s a strength a lot of startup ecosystems don’t have,” he says.

He says this “centre of gravity” combined with a philosophy where every incubator, accelerator and meetup group gets along with each other will help boost the overall ecosystem and startup activity.

“It’s that one place where everybody knows to go so you get the serendipity and it grows a community that hopefully is open to women and diversity,” Cooper says.

These startup hot spots are areas where people go and run into each other, discuss deals, talk about ideas and recommend talent, people and investors.

While it’s difficult to do this arbitrarily, he says these places often develop organically through simple things like having great coffee spots nearby.

“If you’re able to attract satellite offices for a Facebook or a Google or an Amazon, that’s where they would put their 25 or 50 or a 100 employees,” Cooper says.

“Ireland has done that really well.”