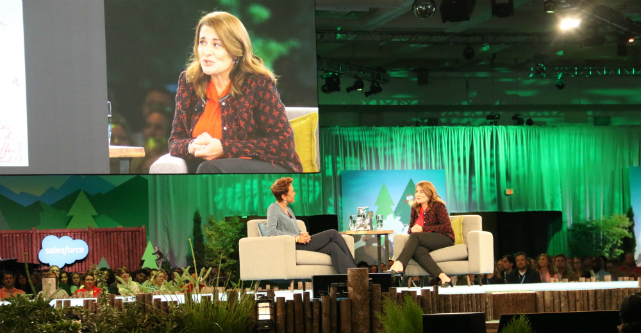 History is set to repeat itself and we will see a new era of inequality unless a considerable effort is made to include women and underrepresented minorities in the tech sector today, Melinda Gates says.

“I think back, to be honest, about the framing of our country,” Gates said during a talk at the Dreamforce conference.

Similarly, Gates said that it’s a critical time for underrepresented groups to participate in the design and advancement of technology.

“In computer science, if you think about where we are going with technology, it’s pervasive,” she said.

“Where we’re going with artificial intelligence and with data is astronomical. If we don’t have women and underrepresented minorities at the table we’re going to keep making some of the mistakes that right now seem somewhat small but they actually could be enormous.”

Gates, who began her career at Microsoft in the early 90s, said the tech industry is one of the few where women’s participation has significantly declined.

“[A] big glaring hole to me is the tech sector,” she said.

With women noticeably missing from executive boards and Forbes 500 companies, Gates is leading an effort to gather big data on women around the world to identify what’s causing the gaps and address them.

What educators can do to tackle the leaky pipeline

With the best paying jobs and opportunities emerging out of the tech sector, Gates said it’s vital to start addressing some the biases against women on their ability to code, lead and be effective board members.

“Everybody’s starting to look at the leaky pipeline,” she said.

Universities and colleges are key points of interest for this, she said, with these institutions playing instrumental roles in changing the stats and encouraging a diverse range of people to dive into the tech sector.

“Have a set of problems that women gravitate towards naturally,” Gates said.

“Make sure you’ve got adjunct, associate and real professors who are women teaching the class. Make sure you make the environment not the basement of some engineering building but it’s in the humanities building, its out in the auditorium, and that there’s role modelling going on.

“If a woman gets into that popular CS class and likes it, and you keep her in class one and class two, you’re likely to keep her all the way through.”

Gates added that universities doing a good job at driving up diversity in their tech and computer science courses should have their strategies adopted by other institutions across the country.

“Computer science ought to be just a fantastic place where droves of young women want to go into and want to code,” she said.