Partners in life and business: How a husband and wife team quit their corporate jobs to build a startup 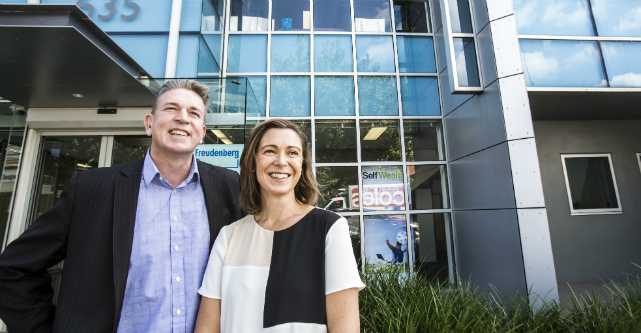 When Louise Ward’s husband Andrew floated the idea of quitting his corporate job to build a startup, the pair were bringing up three children and paying off a mortgage.

Understandably, she was apprehensive, and says this was the once decision the couple didn’t agree on.

“I’m very conservative and I was very unsure about the risk he would be taking, but I was resigned to the fact that it was going to happen,” Louise tells StartupSmart.

“For quite a few years Andrew had been bouncing the idea and he was getting more and more enthusiastic about it.”

Eventually the inevitable happened – Andrew came home from work one day and announced plans to quit his executive job at the Commonwealth Bank to pursue an advice and education platform for self-directed investors called SelfWealth.

Then Louise decided to also make the leap into the startup world.

“I thought to myself, ‘if I’m not going to be able to talk him out of this one I may as well jump on board and get involved myself’,” she says.

The decision paid off. SelfWealth now manages over $500 million-worth of investments each year and is expecting to double its number of users to 50,000 by the end of this year.

Despite her early apprehension, Ward says that honest communication and mutual respect has helped the founding pair stay on track in both their business and personal relationships.

“There is no-one I would rather be on this challenging and rewarding journey with,” she says.

Over the years, there have been many challenges, but the Wards have somehow made it work.

They’ve even managed to maintain a work-life balance, with the word ‘SelfWealth’ now banned at home.

“With both of us working in the business it can be all consuming and encroach on family time,” she says.

Making it work at work

To ensure staff and new employees are comfortable with their relationship, Louise says they have made a deliberate effort to define each other’s roles within the business.

“We have always been aware that some employees may find it awkward and have been very conscious of the way we interact at work, particularly in the early days when the team was smaller,” she says.

Andrew notes that this is something they dealt with quite sensitively.

“We had to be very careful that the new hires didn’t feel uncomfortable working with a husband and wife at the helm,” he says.

Having these defined roles also enables the pair to avoid any awkward situations, Louise says.

“Andrew is always open to hearing all employees’ ideas and views so everyone expresses their views freely in the office but I am conscious at work that I report to Andrew and he has the final say on things,” she says.

“It doesn’t necessarily work that way at home.”

Never holding back any potential ideas is a key to SelfWealth’s rapid growth, she says.

“We never hold back when it comes to sharing our opinions with each other,” she says.

“We respect each other’s view point. SelfWealth wouldn’t have survived if we were trying to keep each other happy.

“Running a business is like making a relationship last – a marriage can only work if you respect each other.

“Often we have a lot of different opinions on how SelfWealth should be run. I get tempered, Andrew gets excited and then we find the right path.”

Reflecting on her decision to leave her stable job and jump into a new business venture with her husband, Louise says it’s all been worth it already.

“It’s been a bit of a rollercoaster,” she says.

“Some of our friends can’t believe we are doing this together but when we look back on this time in our life SelfWealth will be a major part of our journey and how wonderful to have been on the ride together.

“We’ve both learnt and grown a lot as individuals and, if anything, the experience has made our partnership stronger.”

Famous people are often the subject of biographies, but an unknown or lesser known subject is fine too as long as the person is interesting. explore more.