A sales lesson from the three bears 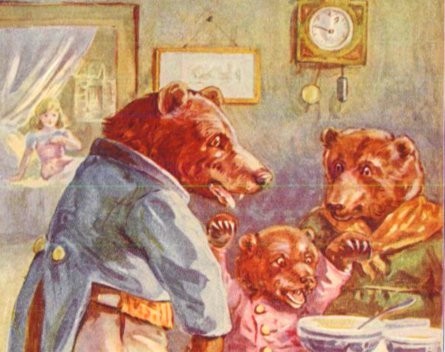 Gather round, sonny Jim, old Taskmaster has a tale to tell.

Once upon a time, a very long time ago, there was a consumer in a key target demographic with a high disposable income, named Goldilocks. Our consumer was in the market for a commodity – namely porridge – and decided to visit some local stores to purchase some for breakfast.

Now, it’s a well-known fact that in those days, bears controlled the local rolled oats industry. Chicago Bears, in fact. It seems the McCaskey family needed an investment for all the royalties they obtained from The Superbowl Shuffle.

Anyway, our consumer visited the first store, called Papa Bear’s Porridge, where she was approached by a big sales bear. Immediately, this sales bear began using a high-pressure sales tactics. This bear was intimidating, kind of looking like a young Tony Atlas. No discovery questions were asked to find out exactly which type of porridge she was after.

This sales bear insisted: “I’m not trying to sell you anything”, but kept pushing the product even after the consumer expressed doubt about it. Meanwhile, the most high-margin, high-sales commission variety was shilled.

Well, after relenting and buying this expensive organic porridge imported from Holland, our consumer took one bite and exclaimed: “This porridge is too hot!” The rest was thrown away, with Goldilocks never to return to that store. Papa Bear’s Porridge was later fined by the ACCC over its sales tactics.

Unfortunately, not being well versed in the optimal serving temperature for porridge, and having just been conned into buying one that was too hot, Goldilocks opted for one that was too cold. Given there was a porridge that better served the customer’s needs, this was something a proactive sales bear might have avoided. Instead, our consumer left the store, never to return.

Having almost given up all hope, young Goldilocks decided to try the new porridge start-up just down the road. Baby Bear’s Porridge, as it was then known.

The entrepreneurial sales bear running this porridge-serving start-up made sure to ask discovery questions and soon found a porridge that was just right. During the discovery questions, young Goldilocks explained that she had been both burned and frozen out by porridge (along with its sales bears).

Baby Bear explained the value proposition of the porridge that was just right in temperature to the consumer. The discovery questions even identified an opportunity to cross-sell another product, while leaving Goldilocks happy with the customer service she received.

Pleased with a product that was just right, our consumer soon became a regular of Baby Bear’s establishment. And they all lived happily ever after.

The moral of the story? Don’t be a pushy salesperson, or a passive order taker. In the long run, you neither serve the interests of yourself nor your customer. Instead, aim to be a proactive seller who never forgets their discovery questions and always identifies the right solution.

Oh, and watch out – there’s some bears around!