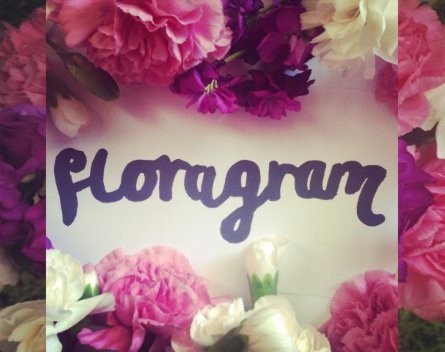 I started a page for Floragram and shared it through my personal Facebook. Initially, it was family and friends that liked my updates and photos, as well as sharing a few posts. As they engaged with the page, I found their friends started to notice the activity and became aware of Floragram as well.

For each of my posts I try to include a photo of a bunch I have made, as visual content grabs more attention in the news feed, particularly when people like a post or comment on it (this activity often comes up in their friend’s news feed as well).

The more active I am on the Floragram page then the more likely people will be to see the brand and trust the brand. They can see the style and quality, and the fact that other people are ordering bunches and hopefully think of the brand when they need flowers next.

Fortunately, no real capital was required to get the basic idea up and running. My first Facebook post simply told people that I would be delivering flowers on Sunday, and asked them to send me a message if they would like to order a bunch for ‘someone special’.

I took a photo of the first orders and posted them to the page, along with photos of other bunches I had made up to experiment with wrapping, bunch size and colour mixing and test demand.

So far I have also created a basic logo, printed my own gift tags to send with the flowers and have been completing the deliveries myself, which was based on that testing and feedback.

Awareness is starting to grow organically through social media and word of mouth – I’m now starting to get page likes and enquiries from people who have seen the posts, seen the flowers delivered or know someone who has ordered them.

Currently, I am taking orders through Facebook messages and organising bank transfers – both of which do not incur a fee. To start off small and keep costs down, I only purchase flowers on days that customers have placed an order. As Floragram grows, I would love to buy a minimum number of bunches and start selling them each day.

Through Facebook messaging I have really enjoyed building a direct relationship with customers. Because word of mouth has been important for growth, I think it’s been crucial to build trust and that one-on-one relationship. I also like to send a follow-up message to confirm once the flowers have been delivered, and the majority of the time I get a message back from the sender saying the recipient loved them.

In general, I’ve been getting a lot of positive feedback about the idea and the bunches, so I think my next step is building awareness. And of course, now that I’ve proved the idea, creating a website is at the top of my list.