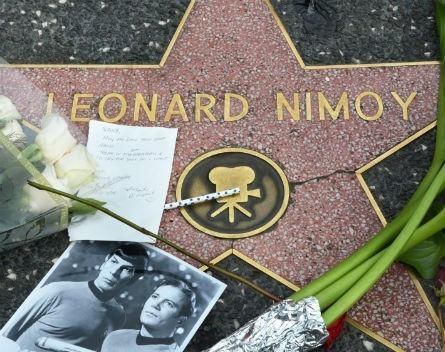 In the days and weeks leading up to the death of Leonard Nimoy, the actor and director most known for playing the gravel-voiced Vulcan Mr Spock in Star Trek, knew he was dying. He used Twitter as a means to make peace with this fact, and to say goodbye to his friends, family and fans around the world with sayings, poetry, and wise words.

A life is like a garden. Perfect moments can be had, but not preserved, except in memory. LLAP

Don’t smoke. I did. Wish I never had. LLAP

So is a new ars moriendi, or a new craft of dying, emerging in the digital age? Historians have argued that dying was a more public affair before the 20th century, when most people were cramped together in one room hovels. Even the rich in their grand houses lived more public-facing lives than we might tolerate today.

Improved housing offers greater privacy for living, including that provided by hospital or residential care, which is where our dying takes place – removed from most people’s sight. The result is not that death is taboo, but it has certainly become hidden – what historian Philippe Ariès called “unfamiliar”.

But that has been changing for a while now. The past 30 years have witnessed an explosion of auto-pathography: published autobiographies about the writer’s own dying, almost always of cancer. Art photographers also have got in on the act, documenting the withering bodies of people dying of cancer or AIDS, or portraits taken before and after death.

Nobody was obliged to read or view these offerings, but in the UK that changed in 2009. Jade Goody, who had come to fame as a contestant on Big Brother, did a deal with the tabloids and OK Magazine to cover her death from cancer, day-by-day, week-by-week. She wanted to die as she lived, in the full glare of the media. For several weeks it was impossible to go into any newsagent without being confronted with front-page images of a bald-headed Goody on her final and very public journey.

These days, the pervasive nature of social media can carry this several steps further. Anybody can now blog or tweet about their own dying – which can be remarkably educational for the doctors who read their patients’ blogs. Online mutual help groups of those with a fatal condition also enables them to communicate, anywhere, any time. Online, they can find emotional and practical support from one other.

Find a bit of beauty in the world today. Share it. If you can’t find it, create it. Some days this may be hard to do. Persevere

After death, social media enable grief to become more shared, more public, than it generally was in the 20th century. Sufferers can express their suffering. And in so doing, they educate others about dying and mourning.

All this is not without its problems. In the 20th century, many people actually valued the privacy that removed their dying or grieving from the sight of others. Visibility, offline or online, creates the possibility of support, but it also requires the sufferer to put on a public face which may not mirror their internal torment.

Visibility also increases the chances of unhelpful comments and even censure. This is apparent in grieving, where mourners may be criticised for grieving too much or too little, too long or not long enough, for being too stoical or too expressive. Facebook, with its upbeat ethos, may not be where young people dying of cancer want to share their worst fears and deepest anxieties.

In the US, split between religious conservatism and liberal humanism, people’s very different ways of dealing with suffering and finding hope in mortality might once have stayed within their communities. But in the borderless online world they bang up against each other, often adding to the suffering. Fundamentalist sites discussing euthanasia or post-abortion grief can be profoundly unhelpful to those seeking advice and counsel. Liberal humanist sites may not be welcomed by some who are religious and after pastoral help.

This is why online groups restricted to particular age groups with particular conditions or particular religious beliefs, can be valuable. But online sites run by people living with certain life-threatening conditions – notably depression and anorexia – can disturb friends and family. Such sites may even embrace suicide pacts or a pro-anorexia ethos, and may get shut down, adding to their members’ feeling not being understood.

Humans have always been mortal, but cultures and subcultures around dying have never been static. The internet and new ways of communicating offer new ways of familiarising ourselves and others with death: printing, photography, sound recording, television, email, Facebook, Twitter, and so on. Each new technology impacts existing tensions such as privacy versus sharing, freedom to die or grieve one’s own way versus surveillance and censure by others, power versus resistance to power.

We can all be certain we will die. But we cannot be at all certain, when our time comes, how technology and society will offer to accompany us on that final journey.