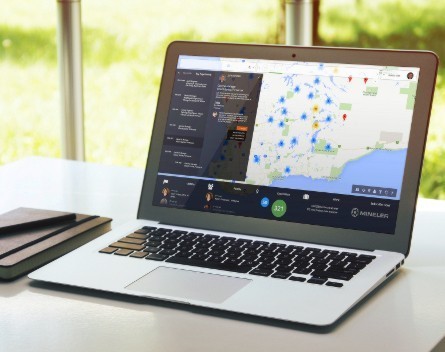 With social network startups popping up in numerous industry verticals, leave it to a Perth-based startup to create a social marketplace for miners.

Mineler launched last week, a web-based platform soon to be available on iOS and Android, where people can discover mining locations around the world, bid for work and contracts, build a global mining work profile and connect with others via LinkedIn-style interaction.

It says it had over 60,000 pre-registered members at the date of launch, with members from as far as Colombia, Peru and Canada.

Geolocation is at the heart of the platform. Users can share their work history and experiences individual mining sites, and interact with others who might be connected to those sites.

Mineler marketing manager Cam Sinclair says the location of mining sites, and the communities that pop up around those sites, is an aspect of mining that sets it apart from other industries.

@MiningOnline @MinelerApp I see Facebook to LinkedIn, to Mineler to be a natural progression for mining professionals, so yes it will work.

“Essentially, the idea behind Mineler is to give people in the mining industry a social marketplace where they can share ideas, and interact on a site-based geographic basis,” he says.

“The mining industry is kind of unique in that it’s based around remote and distant projects. Often, you’ll find people sharing ideas based on what sites they’re on, and you get a sense of community there.”

The startup will encourage people working in those communities to move those interactions onto the Mineler platform. Once there, users can search for jobs, post contract work, and share content specifically related to the mining industry.

The startup has raised $500,000 in seed funding, which helped push it to launch, and is currently in the midst of a $3 million round, according to co-founder Paul Faix.

“The idea was always that mining, which is perceived as very innovative on one side, in the mining technologies, mining machines and everything that comes with it,” he says

“But it’s also very antiquated when it comes to people, management, labour and how it does those things.

“What we really wanted to do is actually help mining companies digitise the latest management practices, including the outsourcing of labour and people, by creating a global marketplace.”