Now a word from your local sponsor 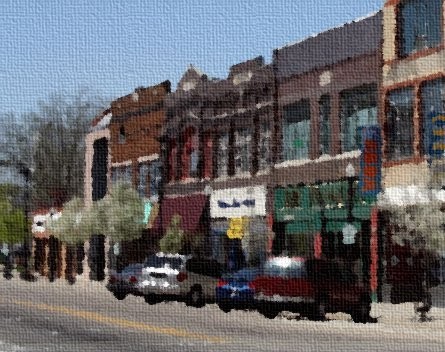 After another chaotic day in Taskmaster Towers, your humble correspondent commutes home to the Taskmaster Ranch in Parts Unknown.

Aside from the Fairfax and News Limited local papers, the nearby local town – in the valley overlooked by Taskmaster Towers – has a semi-regular community-owned paper.

Many miles from the glistening office towers of the mainstream media, the local paper in Parts Unknown is created in a room in the fading 1930s weatherboard and fibro shack beside the local Uniting Church.

It is largely staffed by elderly volunteers from the church and local Country Women’s Association and filled with the writings of any local who submits a column before the generous, apparently monthly deadline. That said, no one is ever too surprised when it ends up being sent out a week or three late.

Now, to call this a news paper is a bit of a stretch. The local historical society’s column, for example, covers the current events of a century ago.

The local footy club regularly submits what could be described as a work of creative fiction when it comes to their predictions of upcoming victories against nearby rivals. Especially when judged against recent form, if the author were a clairvoyant, she or he would probably be sued for malpractice!

Also included amongst its pages are reports written by people from the local schools, the police station, the volunteer country fire service, the arts society, a local MP, a shire councillor, the town chamber of commerce and a few of the local cranks. Some are pseudonymous – a practice your old Uncle Taskmaster can’t stand!

The first is, of course, the labour of its small and greying crew of volunteers. Rain, hail or shine, they trundle down on the days between their volunteering at the local op-shop and the when the grandkids come around.

The other is the support of local small businesses. Almost all the local businesses – around 90% at an educated guess – advertise with their local community rag.

Yes, you can have all the volunteers, cranks and civic goodwill in the world, but at the end of the day, unless someone pays the printer and the power company, no newspaper will arrive on anyone’s doorstep.

So is there a community-owned newspaper or radio station in your hometown or suburb? If so, it might be time to build your brand awareness locally by putting a couple of ads in your local community paper.

Alternatively, if you already maintain a business blog, it might be worthwhile contributing some of your blogs as columns to a local newspaper or community group newsletter.

Especially if you already sponsor or support a local community organisation, re-enforcing it through the local paper can help reinforce your image as a community-focused business.

Get it done – locally!