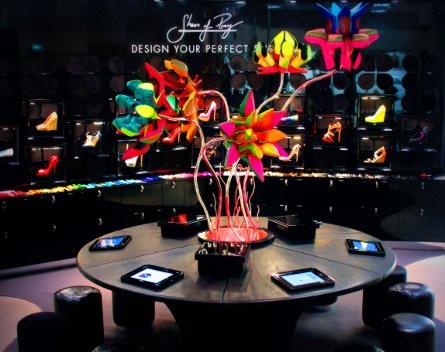 Shoes of Prey co-founder Jodie Fox told StartupSmart from China, where she’s working with the company’s product team, the win was a “wonderful coup”.

“There won’t be many times in my life I can say I beat Karl Lagerfeld,” she says.

Located on the fourth floor of upmarket department store David Jones in Sydney’s CBD, the store has been outperforming expectations in the nine months since it opened, Fox says.

“It’s really proven itself,” she says, adding that the company is excited by its possibilities, although plans to roll out more physical stores were yet to be confirmed.

The store was designed by retail specialists The General Store and beat the Puma flagship store in Osaka, Japan, and a Karl Lagerfeld concept store in Paris in the less than 1200sqm award category.

Strategy partner at The General Store, Matt Newell, told StartupSmart his team approached the design in terms of creating an experience.

“I said to Jodie the last thing I will give you is a beautifully designed store. We wanted to present an experience,” he says.

The Shoes of Prey store is just 29sqm in size and dominated by a 2.4 metre high flower made out of the company’s shoes by set designers from the Australian Ballet and includes many of the materials used to make the shoes.

It features a table finished with soft black leather, chairs made with a range of materials like suede and stamped patent leather, a “signature scent” and “custom-composed” soundtrack that includes the sounds of high heels clicking and Fox’s cat purring.

Newell says he hopes the Australian retail industry will consider the importance of multidisciplinary teams when it comes to retail design and “goes for it” in future.

“Australian retailers have this terrible tendency to travel around the world and steal ideas from (British supermarket chain) Tesco and bring it back and do it half as well,” he says.

“We’re so focused on what the rest of the world is doing, we should be backing ourselves. The creative talent in Australia is off the charts.”

Shoes of Prey chief executive Michael Fox said in a statement: “This is our first foray into physical retail, so winning ‘Store Design of the Year’ at the World Retail Awards is an incredible achievement for our team.”