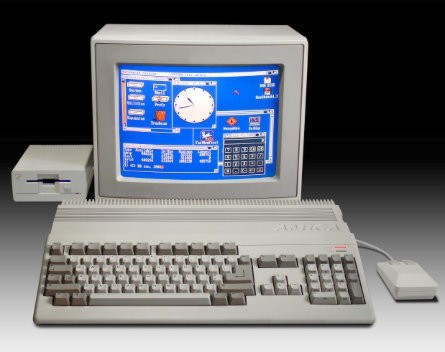 There is a myth that there is an inevitable path of technological advance where new, superior technologies inevitably knock off their older predecessors.

It’s a myth many tech start-ups are prone to. Build a better mouse trap and they’ll sell by the truckload.

Well, to any of you holding these myths to be self-evident, Old Taskmaster has just three words to say: Amiga Video Toaster.

See, back in the day when people asked “Mac or PC”, (well, Mac or IBM compatible as it was back then), there was a third option many opted for: The Amiga.

Now in 1990, on the Mac side of the fence, Apple was still charging over $6,000 for a black and white Macintosh (like the SE/30). Before 1987, they couldn’t run more than one program at a time. When they finally did do multitasking, it was with a crash-prone method called co-operative multitasking. Contrary to popular myth, the first true pre-emptive 32-bit multitasking colour Mac didn’t arrive until the release of OS-X in 1999.

The PC side of the fence was far worse. For those who have never experienced the “joy” of a PC running MS-DOS refusing to boot because the AUTOEXEC.BAT or CONFIG.SYS file isn’t configured correctly, just imagine the computer equivalent of root canal surgery. It didn’t get a colour pre-emptive multitasking operating system until Windows 95.

In contrast, first released in 1985, the Amiga was a useful colour video editing tool. By 1990, you could hook up to four video cameras up to one and switch between them in real time:

Why the name video toaster? Because it was designed to make high-end video editing something you could do on an everyday appliance.

Aside from video editing, it also did 3D animation, was in full colour, had four-channel stereo sound, pre-emptive multitasking, mouse control, windows, icons and menus. It also ran many of the regular PC productivity apps, including WordPerfect.

From the computer animation on television series like Seaquest DSV, to tracking NASA satellites, to running the displays at Brisbane’s Central station, to the Israeli Air Force, to – by some accounts – powering the graphics at some of the early Macworld shows and in the video production department at Microsoft, there was an Amiga behind the scenes.

Even though it used the same series of processors (the Motorola 68k) as the early Macintoshes, because it had a series of separate graphics and sound processors, it was a magnitude faster and more powerful than its rivals. Yet it still cost less.

However, despite all this, it failed to gain sufficient traction in the marketplace. It’s time for some guru meditation on why this happened.

Poor management and poor marketing shoulder a lot of the responsibility. Just like BlackBerry 10, while it was ridiculously more advanced than any of its competitors, this was never effectively communicated to the public.

Other salespeople, mostly out of ignorance, stressed the importance of getting a “serious” computer (ie an IBM PC) that could run WordPerfect (badly) but not have enough horsepower to do high-end video over one that could do both (the Amiga).

The moral of the story for anyone with a tech start-up is clear. It’s just not good enough to arrogantly assume your technology or product will succeed on merit, even if it is clearly ahead of everything else in the marketplace. You need to do the hard yards in selling and marketing your product, or else it will flounder.