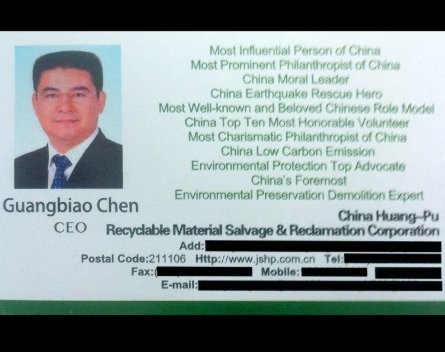 Chinese billionaire Chen Guangbiao became an internet sensation recently after pictures of his business card listing his attributes, including “Most Influential Person in China”, went viral.

Other qualities spruiked on the card included: Most Prominent Philanthropist of China, China Moral Leader, and China Earthquake Rescue Hero.

But for the entrepreneur or anyone starting up their own business, image experts don’t recommend you try it yourself as the business card is still regarded as an essential tool in business networking.

He says the swapping of business cards is still an important part of protocol and etiquette in business circles, describing it as a ritual exchange of information.

If you offer a card but don’t receive one in return, it can leave you walking away feeling empty, Michail says.

He says the exchange of business cards in Asia is especially ingrained in business circles where it reflects respect and honour.

“If they give you a card because that’s what their expectation is, you don’t want to be left not handing anything back,” she says.

Nesci advises that start-ups and entrepreneurs have business cards printed as soon as they set their businesses up and ensure it reflects other material that reflects their image or brand.

She suggests that in Australia, a person’s credentials probably don’t need to be listed on the card, unless they’re relevant to a particular field.

“Some people would look at it and say `what for’. We’re probably not as boastful or out there.”

Michail says the effort you put into your business card will reflect on the image you’re seeking to project.

“If you give out a flimsy business card, the psychological impression is lightweight.”

So what should you include on a business card? Here are Michail and Nesci’s suggestions: