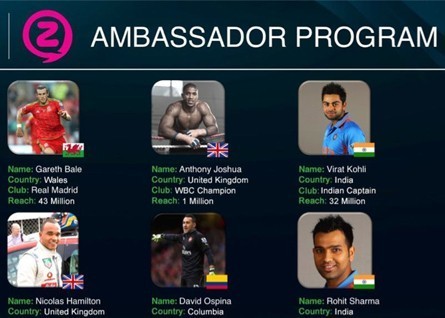 Australian telecommunications startup ZipTel has brought on board a team of world-renowned sportsmen to help its Zipt mobile app reach more users.

The app, which enables users to send SMSs and make international calls to one another for free, looks determined to conquer the Indian market, signing up the country’s cricket captain, Virat Kohli and opening batsman Rohit Sharma.

The other big name to now represent the company is Gareth Bale, the Welsh-born Real Madrid winger described by ZipTel as “the world’s most expensive footballer in history”.

The sports personalities have a cumulative social media reach of more than 100 million internet users and the agreement requires them to promote the company’s Zipt app through posts to their social platforms and uploading branded profile pictures.

“These are major agreements for ZipTel and marks the next phase of growth for the Zipt app, which is already achieving over and above our expectations with downloads and revenues ahead of what we initially anticipated,” executive director Keaton Wallace says.

“The quality of these ambassadors provides Zipt with a truly global brand proposition and positions the company to push for massive user uptake in 2016.”

The new 12-month agreements comes after a successful partnership with Australian paceman-turned-Bollywood-actor Brett Lee that Wallace said was proved successful in driving installations of the app in India.

The global roaming company also won an exclusive supply agreement with travel business Trafalgar Tours to supply and distribute over 17,000 of its SIM card products to all Trafalgar customers.