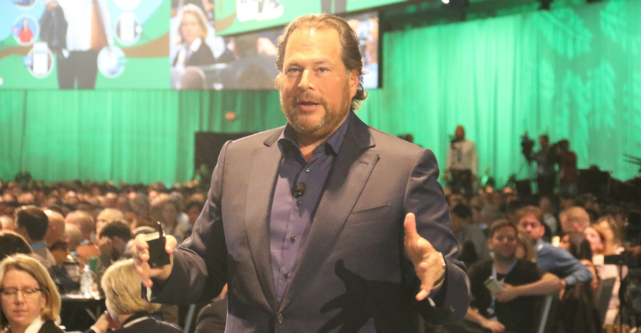 Salesforce CEO Marc Benioff has implored entrepreneurs and business leaders around the world to give back to those who need it as they grow.

During the keynote speech at Dreamforce in San Francisco, the Salesforce founder echoed a pay-it-forward sentiment that spread across the entire conference.

In the speech, Benioff referenced Albert Einsten while discussing why it’s important for founders and entrepreneurs to do good while making money.

“Only a life lived for others is a life worthwhile,” Benioff said.

Earlier this year during Salesforce’s World Tour stop-off in Melbourne, more than 700 companies had joined the Pledge 1% movement Salesforce is leading.

Now, more than 1000 companies have made the pledge, contributing equity, product and 1.6 million hours in service to non-profits and education initiatives.

“Thank you to the non-profits and NGOs for holding the world together,” Benioff said.

The sentiment echoed throughout the festival, which was watched by millions around the world and drew more than 150,000 executives, entrepreneurs and business leaders to downtown San Francisco.

Among the hunger for success, new product launches and lucrative deals, a hum for equality, justice and purpose-driven business underpinned the large event.

“We’re all watching how these guys make billions, we’re also in a world where when the rich are getting richer, the poor are getting poorer, and that’s not right,” prominent entrepreneur Tony Robbins said the day before.

Black Eyed Peas front-man and entrepreneur Will.i.am boldly told the audience of innovation leaders that the tech sector still has a long way to go.

“Why does it have look like this in the room?” he said.

At the exclusive Dreamfest concert headlined by U2, lead singer Bono took the opportunity to promote awareness about Red, an organisation striving to end AIDS in the next generation.

Salesforce VP of philanthropy Ebony Frelix said they’re working to raise at least $1 million for Red during this year’s Dreamforce.

“Bill and Melinda Gates have generously offered to double match all the money we have made here at Dreamforce,” Frelix said.

“The Benioffs have also offered to put in $1 million.”

Salesforce’s chief equality officer Tony Prophet said they have “adopted” schools all over the world and asked each person watching to follow suit by simply visiting their nearest public school and asking what help they need.

The next chapter of the digital age

Benioff’s keynote also addressed the “next chapter of the digital economy”, involving the convergence of artificial intelligence with cloud computing.

With clients ranging from NGOs and small businesses through to some of the biggest corporate companies in the world, Benioff said the introduction of AI to CRM through Salesforce’s Einstein would help all “get smarter” about customer relationships and lead generation.

“This is the future, we’re moving forward,” he said.

“The way we interact with computing is about to change again.”

Salesforce data scientist Dr Shubha Nabar said Einstein will identify leads automatically from emails and communications, evaluate them and then prompt users to pursue the ones with most potential.

“It’s processing this data, it’s learning patterns and it’s making predictions about the future,” she said.