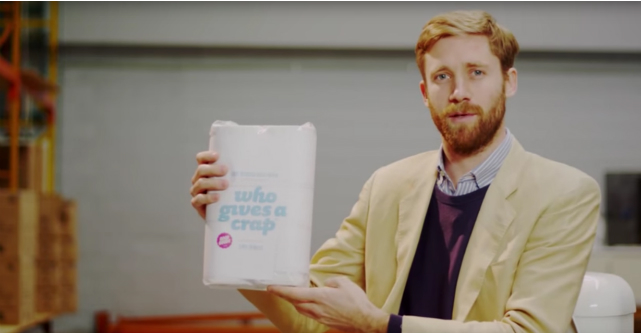 “Crowdfunding is an awesome way to launch a business, but there is a tonne of preparation that goes behind a successful campaign,” says Who Gives a Crap co-founder and chief executive Simon Griffiths.

Since launching in 2012, the Melbourne-based social enterprise has donated over $400,000 to sanitation projects around the world, giving more than 100,000 people in severely impoverished communities access to toilets.

Read more: How this real estate business that gives a crap is saving hundreds of lives

In an ask-me-anything on The Sunrise, Griffiths reveals the idea for the venture had been brewing for more than two years before its launch and that a successful crowdfunding campaign is what put them on the map.

“We won a spot at The Unreasonable Institute in mid-2010, which was when we really started to develop the idea,” he says.

“Six months later we were ready to launch a prototype collaboration, but some changes in the market [meant] that had to be scrapped. As a result, most of 2011 was spent working out how to leapfrog the initial collaboration prototype to get our own product into the market.”

While actively laying the groundwork for the new impact-driven business, Griffiths says he paid the bills by tutoring 20 hours a week at Melbourne University.

“We talked to retailers, distributors, business and individuals to work out who our customers would be,” he says.

“We found a manufacturer that we thought we could work with in the long run, sampled product and tested it with friends and family. We created a brand identity with Swear Words (graphic designers) in Melbourne and Miss Tallett (copywriter) in the UK, and worked out how to warehouse and ship a bulky product around Australia and the US.”

“At the start of 2012 we filmed our first crowdfunding video, but quickly realised that it wasn’t that interesting to watch,” says Griffiths.

“Someone in my shared office introduced me to Naked Communications who loved what we were doing and agreed to [help] us to develop a new crowdfunding strategy and video on a revenue share basis.

“We thought it would take one month to re-shoot the campaign, but it ended up taking six, and we launched in July 2012.”

How did they do it?

Here are seven key points from their strategies.

Well before launch date, Curtis says it is essential to figure out your “how” and “why”.

“Do you have a legitimate ask besides ‘we want money’?” she says in Forbes.

Focus on just one to three things that will enable you to reach the crowdfunding goal in 10 days, says Ferriss, and forget everything else.

To help with this, he recommends using online tools, including automated systems, virtual assistants, and delegating tasks to save “countless hours of work”.

Ninety percent of the work, including drafting emails, should be done before the campaign launches, says Ferris, so when it goes live you just need to click “send”.

Curtis’ team prepared an email in advance, which was sent to 2000 people using MailChimp when the campaign went live.

4. Create buzz in the right places

Figure out the top three sources of traffic for the most successful campaigns on the crowdfunding site you’re raising on, says Ferriss, then focus on generating awareness and “buzz” in these areas, whether that be Facebook, Twitter or via email.

Ferriss used a virtual assistant to identify the top traffic drivers for Kickstarter’s most successful campaigns.

5. Enlist ambassadors to spread the word

Curtis recommends securing ambassadors for your campaign at least two weeks before launch.

She used an ambassador form in Google, which was sent out to about 200 people across her team’s networks.

6. Get smart on media coverage

When it comes to media coverage, Ferriss says, “20% of stories will yield 80% of your press results”.

When selecting media outlets to approach, Ferriss says campaigners should consider relevance, readership, and reach, and work on building a relationship with at least one person inside the organisation.

He has also found that news and content sites, including blogs, that are outside mainstream media can often yield better results in terms of audiences converting into backers, so don’t forget to reach out to these types of publications.

At launch, Curtis says you should aim hit at least 25% of the fundraising goal within 24 hours, then keep backers in the loop and always thank them.

“You should plan on sending updates to your backers and networks throughout the campaign, ideally in video format for a few of the critical moments such as when you’re halfway to your goal or 80% there,” she says.