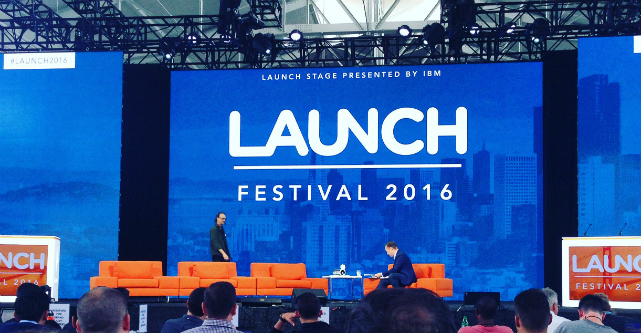 If there’s a slowdown in the US startup economy, you’d be forgiven for looking past it at this month’s Launch Festival in San Francisco.

Self-proclaimed as the world’s largest startup event with some 15,000 founders on the books, it’s certainly the only large-scale initiative where early-stage and pre-revenue startups are the true heroes of the event.

Now in its sixth year, Launch Festival is the cherished offspring of investor, entrepreneur and indie media mogul Jason Calacanis.

Calacanis is good at picking winners – an early-stage investor in Uber, emerging brand Thumbtack, and the Tesla model S car to name just a few. And so too are the Conference team it seems, boasting rock star alumni such as Dropbox, Fitbit, Yammer and Mint.

More than 50 startups showcase their business at the festival, on stage and in the ‘demo pit.’ Startups enter stealth mode for several months before the event, and many literally launched on stage – with apps, websites and other digital offerings going live during their four-minute pitch.

Thanks to careful curation by the Launch team, the quality of the startup brands is impressive – you can view the winning pitches here.

Startup showcasing is complemented by interviews, panel sessions and Ask Me Anything sessions from developers, investors and successful startup founders from all parts of the startup landscape.

Here are some key themes running through this year’s event.

The prevailing view from the investors at Launch Festival is that great companies will always be able to raise money.

What we will see is the ‘tourists’ leaving the ecosystem, says Chamath Palihapitiya the influential founder of SocialCapital who predicts that “40% of all startups who never should have gotten funded in the first place will probably fall by the wayside. The best founders actually typically start in times like this,”.

He also notes that a hundred billion dollar company has been started every six years in the past few decades. The next one is due this year according to his research.

Great ideas might cover a multitude of presentation sins, but not everything is forgiven on the Launch Festival stage.

One startup got the thumbs down from the crowd for being too ‘creepy’ and unapologetic about their use of personal data. Beyond its one-size-fits ‘change the world’ ethos, anti-creepiness, like diversity, is a rising force for good in the startup world.

Make no mistake you can still do disturbing things with data – in fact it’s encouraged – but for the sake of sustainability these days the spirit of the law is just as important as the letter of the law.

Still there were no startups visibly selling a privacy product – other than our own Katryna Dow from Meeco, who was at in the audience at this year’s event.

Meeco is a digital platform which provides individuals with the ability to store and exchange personal data on their terms. During her week in San Francisco, Katryna was actively courted by some of the Valley’s biggest social and platform providers. With a privacy storm brewing in Europe but yet to hit the US and Australia it seems the multinational players are only too aware of their own limitations.

On the same stage, Planet Labs talked about their current project that will launch 150+ satellites around the globe to take daily images of every surface on earth.

The imagery is to be used for positive purposes such as agricultural mapping and emergency planning. Still, with access to an unprecedented level of imagery, ‘do no evil,’ will be an important philosophy for the brand.

If diversification is the new strategy at the top of the startup world, solving and owning a deeply vertical problem remains a passionate quest at the beginning of the disruption journey.

Personal safety startup Guardian App is a wonderful example of trying to do one important thing well. Launched on stage, the app simply allows you to input and track your inner circle of loved ones in an emergency.

Founder Mark Jeffrey references the time his fiancé had a stroke and he and others could not make a fast enough plan to assist her – which was the inspiration for the product. The app took out the award for best Diamond in the Rough.

Podcasts are alive and well

What was useful was understanding the reason we should continue to think in podcast terms for the foreseeable future. The Betaworks development team was particularly bullish on podcasts because of “the intimacy of the channel and its ability to intercept with voice activated products such as Amazon Echo”.

Chat is the new mobile

Another gem from the stage – the next interface after mobile is tipped to be chat, which bodes well for brands such as Slack and our own Atlassian and new entrant Rivvr.

“Mobile is saturated, and it is hard to get organic growth,” Peter Rojas of Betaworks said. “We are looking at new paths for customer acquisition such as Slack chat platforms.”

Ed-tech is coming for your degree

A recurring conversation across the three days was the importance of continuous learning and ‘drip feeding’ information to audiences at the time when it is most needed and relevant (as demonstrated by festival winner Daily Drip).

Get ready for your third arm

With a sub-five thousand dollar robotic arm soon to be available via Carbon Robotics, it’s clear that robotic help will come to the masses this decade.

The overall winner of the Launch pitching was Café X, a robo barista, which uses a robotic arm to create consistently ‘good’ coffee 24/7 from a portable café pod. Highly scalable, with enormous commercial potential, Café X is beautiful engineering, and drew a lot of attention throughout the three-day festival.

As for the coffee? Even by American standards, it may need to improve significantly in beta stage.

As part of the wrap up of the three-day event it was announced that Launch Festival is now heading to Australia.

Calacanis already has a footprint here. His online media site This Week in Startups (TWIST) has landed under the fortnightly podcast TWISTA (the A is for Australia), hosted by local inventor and broadcaster Mark Pesce.

While Calacanis is staying quiet on when and whether the festival will land in Sydney or Melbourne, it is no doubt destined to become a national – even international (think Asia-Pacific) event.

Fleur Brown is founder of Launch Group Australia and Launch Group US and a co-founder of leading ideas festival TEDxSydney. You can find her on Twitter at @fleurbrown and @Launch_Group.