Some things I’ve learnt about money, work and happiness 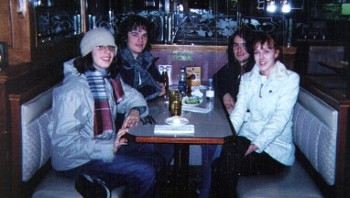 I moved to Australia from New Zealand during 2000 in my early twenties.

Until then, I’d never had a job that paid a wage. I had met Grant Thomas, manager of Neil Finn and some big Australian bands, when I organised a Youth Suicide Awareness festival in Wellington a couple of years earlier.

I’d never considered working in the music business until after the show. Grant said he’d love me to come and work with his company if I wanted to move to Sydney. I’d be his assistant and would find and manage my own artists too.

Grant offered me a basic wage of $25,000 per year and said I’d earn a share of any bands that I brought into the company.

It sounded like a fun business and I would forge my own path from within an established brand and organisation.

Within three months I discovered and signed an unknown band from Brisbane called George – and fell in love with the chaotic, exhilarating music business.

The industry was full of delightful characters: gig promoters, record company executives, venue owners, merchandise makers, radio programmers, producers and musicians.  There were no rules, anyone could make it and everyone was so passionate about their projects.

I managed George for two years; there were tough lows and soaring highs. But every day I came into the office with a spring in my step, ready to take on the next challenge.

In March 2002, George’s début album hit number one on the ARIA chart. I was still only earning $25,000 because we hadn’t ever worked out what my cut would be.

Although I didn’t care much about money at that time, I was now 24 and my friends all earned much more than I did.

They dined at pricey restaurants and travelled on holidays I couldn’t afford. For the first time I started to think about getting a “real” job.

Sony Music had advertised for an A&R Manager, so I applied. My interview went well and HR gave me a form to fill in.

One of the questions was “what is your expected salary?”

This stumped me. At the time, I earned $25,000 and was pretty sure this job paid at least three times that. $75,000 would represent a massive lifestyle upgrade.

It occurred to me that since I wasn’t passionate about Sony Music, whatever number I wrote down would be the price for which I’d sell one year of my time.