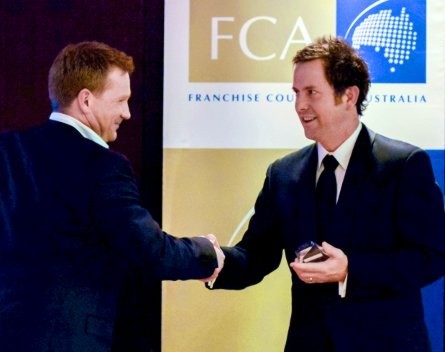 The first group of state winners have been announced in the Franchise Council of Australia’s 2013 Excellence in Franchising awards.

Anthony Hamod took out the Franchisee of the Year award for his Wollongong-based Fastway Courier franchise.

Hamod told StartupSmart while he loved being his own boss, his success was all about his staff. Since launching the franchise in 2004, his team has grown to 17 couriers and a coordinating team of four.

“The big challenge at the beginning was motivating people to meet the expectations you have about your own business. I have such high standards, so I needed to bring the right people in,” Hamod says.

“Your team needs to be customer-focused. As a small business owner it’s all about your customers, and good customer service. Everything else just flows through this, the sale and bottom line flows through.”

Hamod told StartupSmart his focus was on developing his franchise. “We’ve got a lot of potential to grow. We’ve achieved around 30% growth year-on-year for a bit now, and we’re forecast to grow 25% in the next financial year,” says Hamod.

Business partners Anthony Stahl and Daniel Mesiti won the award for Multi-unit Franchisee of the Year. They began franchising in 2004, and own five franchises with the Retail Zoo – four Boost Juice Bars and one Salsa’s Fresh Mex Grill.

Stahl told StartupSmart the key to franchising success was embracing the franchise system. “It’s still your own business. Think about it as though it’s all on you and you’re just renting the brand,” says Stahl.

“The franchisees that do well are the ones that lean on the system and trust it, rather than trying to shortcut it. The support from head office is very good. There are lots of field managers and I think it has the best costs of goods in the country for similar business.”

Stahl and Mesiti took on the Salsa Fresh Mex Grill business after Stahl complained to the Retail Zoo head office about his local store.

“They said well why don’t you take it on, and we did,” says Stahl, who explained the store was underperforming due to lack of investment in staff support. “We helped the team to understand the business from a business perspective not an operational one. Our customer service did increase a lot because the team got what we were all working towards.”

The other NSW/ACT Excellence in Franchising Awards winners were Adam Moody from Wendy’s Supa Sundaes, who won the Field Manager of the Year award, and the team at Narellen Pools, who took out two of the five awards, with Debb Meyer winning Franchise Woman of the Year and Fiona and Danny Harvey winning the Franchisee Community service award.

These winners are now finalists for the national awards which will be announced on October 22.