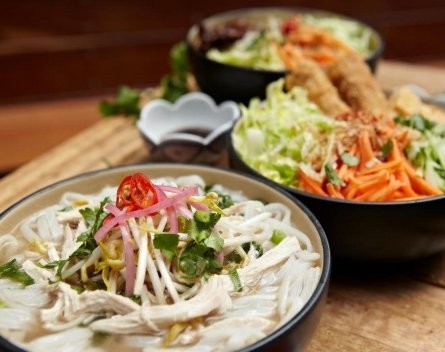 Vietnamese street food franchise Roll’d plans to expand nationally after growing out of a $180,000 investment in a hawker-style eatery in Melbourne just over a year ago.

Since the initial store, Roll’d has grown to six stores across Melbourne and 100 employees and now has Canberra, Brisbane and Sydney in its sights.

Co-founder Bao Hoang told StartupSmart the rapid growth of the business is underpinned by a strategy they spent three years developing before selling their first rice paper roll. Stores can serve over 800 customers each lunch time and are achieving monthly sales of $500,000.

“We’re reasonably aggressive in our strategy, and it is on the back of three years of preparing. It’s not like we just opened the store and said ‘hey wow this is great’. We had a pretty specific strategy on how we wanted to expand,” Hoang says.

A physiotherapist by profession, Hoang had been part of a physiotherapy franchise system prior to launching the stores with his cousins, Tin Ly and Ray Esquieres.

“While none of us had a strong background in food, I knew the pros and cons of the franchising groups and had learned what to do and what not to,” Hoang says.

Five of the current stores operate on a franchise model. Hoang says they plan to expand to Canberra and Brisbane this year, and Sydney next year. The plan is to have 28 stores altogether by the end of the current financial year.

“At the end of the day it’s about building a profitable model. It’s a challenge we’re still trying to get much better at. Our price point is quite low, which is very good for the consumer but it means getting volume into our system is the key,” Hoang says.

Hoang says transforming a family business into a national model has been a steep learning curve for the Roll’d team.

“A lot of the recipes are my mum’s recipes, but we’ve found ways to develop it so a couple of items will be the secret herbs and spices factor, and no one else will ever know what they are,” Hoang says. “But we’ve included them in easy-to-follow recipes so every store can do that.”

Ly will be moving to Brisbane to manage the investment and launch phase. They’re currently assessing some options for national distributors.

“We want to make sure the costs don’t increase too much for our franchisees. If we have a national distributor, we need to get that balance right. We need to get a standard rate across the board for the whole country, but that has to work for every store,” Hoang says.

Hoang says they’re looking for people with strong management skills who are flexible enough to be part of a rapidly growing system.

“For us, it’s pretty simple. It’s all about management of people. We’ve worked very hard in the last three years to develop the process of a business,” Hoang says. “We’re innovating all the time because we’re still really new. So if we make a change, within reason, they need to move with us.”

He adds the rapid growth also provides a lot of scope for innovative franchisees to be part of the evolution of the system.