WA is all the GO! for Brumby’s hybrid model 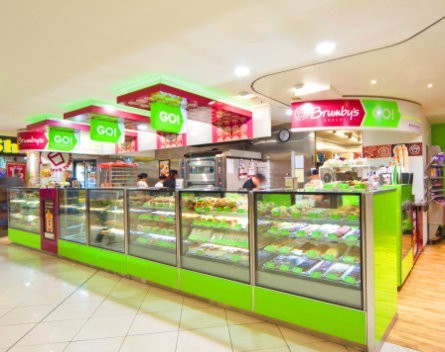 Retail Food Group has highlighted the success of hybrid business model Brumby’s GO!, which is looking for franchisees to accelerate the brand’s growth, particularly in regional WA.

Brumby’s GO!, an offshoot of Brumby’s Bakery, is a hybrid business model that combines the traditional Brumby’s offering with café-style meals and snacks, coffee and cold drinks in an eat-now, single-serve format.

As with Brumby’s Bakery, Brumby’s GO! is part of the Retail Food Group, which takes in well-known brands such as the Donut King, Michel’s Patisserie, bb’s café and Crust Gourmet Pizza.

Brumby’s GO! already has stores in Queensland and the ACT, and is now looking to accelerate its growth in regional WA after opening outlets in South Hedland, Margaret River and Exmouth.

South Hedland is a suburb of the Town of Port Hedland, which has grown considerably in recent years due to the mining boom, while Margaret River and Exmouth are WA tourism hotspots.

Brumby’s GO! is now looking for franchisees in other WA mining towns such as Newman, Karratha, Kalgoorlie and Tom Price, and the seaside town of Geraldton.

Steve Pagett, managing director of Brumby’s GO!, says the brand’s success can be attributed to the simplicity of the concept, and the unmet demand for bakeries and café-style environments in mining towns, where high rents mean independent operators often struggle to survive.

“It’s the convenient and cost-effective meal solutions offered by Brumby’s GO! as well as staples like fresh bread and fresh bread rolls that mean we are able to fill a gap in the market in towns where there were previously limited fresh bread or ready-to-go snacks available,” he says.

However, Pagett is quick to point out there are added challenges that come with operating a small business in a regional town.

“There are challenges for potential franchisees in regional locations, mainly attracting qualified bakers to the area as well as retaining customer service staff,” he says.

Jason Lohman and Elise Denham, who own the Brumby’s GO! store in South Hedland, admit they initially struggled to find qualified bakers who were willing to work in a remote area.

“There was no interest from bakers in Australia to work in South Hedland but… we were able to attract overseas bakers and have sponsored three bakers who are now permanent,” Denham said in a statement.

“We employ 20 people, over half of which are South Hedland locals, and we are able to give high school students work experience positions.”

Pagett says the beauty of the Brumby’s GO! model is its status as a standalone store.

“We’re not in food courts typically, which allows us flexibility in terms of running times because we’re not bound to the opening hours of a particular centre,” he says.

However, franchisees are expected to be heavily involved in the business.

“We want our franchisees to be working in the business that they’re purchasing. We do have some owner-managers but they’re very rare in the regional stores,” Pagett says.

“We’re looking for people who have a love for food. You don’t necessarily need to be a baker per se but that’s a bonus. You clearly need to have some business savvy.”