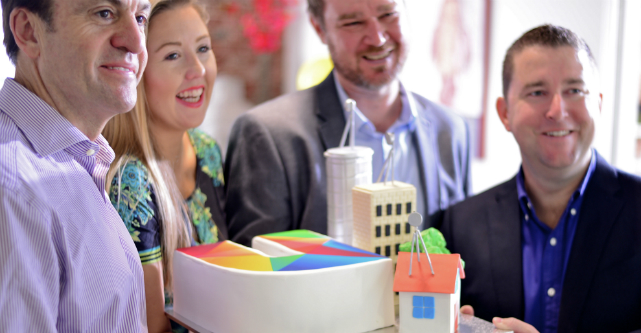 UNITI offers fast fixed broadband connections wirelessly which it says is quicker and more affordable than the government’s NBN.

Although the exact amount hasn’t been disclosed, UNITI co-founder and co-CEO Che Metcalfe says it is well into the seven figures.

He says the cash injection will help the startup rapidly expand across Australia and take the fight directly to the much-maligned NBN project.

“This validation is amazing and has given us a massive shot in the arm,” Metcalfe tells StartupSmart.

“We’re fired up, cashed up and ready to go.”

Despite proven market traction and revenue, Metcalfe says he was met with continual rejection when pitching his tech company to potential investors.

“We started to get a fair few knock-backs with people questioning why we were doing it when there is the NBN,” he says.

“We had a sensible answer but they wouldn’t listen. Telcos aren’t the flavour of the month.

“But through a network of early angel investors and the runs we were putting on the board it started to become harder and harder for people to ignore what we were doing.”

After being introduced to Spenceley through a mutual friend, a strong relationship was quickly formed, leading to the recent investment.

“From the first phone call there was synergy,” Metcalfe says.

“He’s the first person who has invested and understands exactly why we’re doing it. Him and Tony have a longer term vision for the company and where we could take it and they’re going to help us with that journey.

“We’re feeling really lucky at the moment because we know how hard it is to raise money, especially if you’re not in the sweet spot at that point in time.”

As part of the investment, both of the prominent tech entrepreneurs will also be coming on board as strategic advisors for the next 30 months.

Metcalfe says the difficult journey through rejection was worth it in order to find an investor that was the right strategic fit for UNITI.

“As an entrepreneur you get lots of knock-backs and we’re used to that,” he says.

“You keep telling your story to everyone and getting runs on the board. We needed to find strategic investors within the industry who knew what we were saying was the truth.”

Taking on the NBN

With the funding under their belt, the UNITI team is now planning a rapid expansion across most of Australia, with a goal to service 100,000 people by 2021 and create 150 new jobs, Metcalfe says.

UNITI is positioning itself as a direct competitor to the NBN, and he says one of the most difficult challenges he faces is educating the market that there are other options out there.

“We’re letting people know that there are other options and we’re not the only ones,” he says.

“There are other ways to get the internet than being on the NBN. That isn’t an easy job.”

He says that the UNITI offering has several advantages compared to the NBN.

“The NBN roll-out is very slow; we’re very nimble and quicker getting to market,” Metcalfe says.

“The NBN business model was broken from the beginning. We own our network from end to end and can control the quality of it. We don’t have to worry about another wholesaler in the middle between us and the customer.

“We’re never going to be as big or far-reaching as the NBN, and that’s not our goal.”

And the goal of 100,000 customers is the conservative estimate, Metcalfe says, with the opportunities becoming far greater if the NBN continues to struggle.

“It’s really too hard to predict. If the NBN goes from one disaster to another and continues down that path, that creates a much better opportunity for us.

“We don’t know how the competitive landscape will look.”

The founder says it’s important for other entrepreneurs to focus on their business first and foremost and not become distracted with the wider startup world.

“In this business you need to be very, very focused on achieving your goals and moving forward,” Metcalfe says.

“If we listened to all of the hype, incubators and startup groups that say you need to follow the Silicon Valley model and go to all the events then we would have spent all of our time talking about running a business and not actually doing it.

“We’ve been focused on getting runs on the board and generating revenue – that’s what eventually wears investors down.

“Trendy things can come and go but having a business that can scale and generate revenue is what matters.”