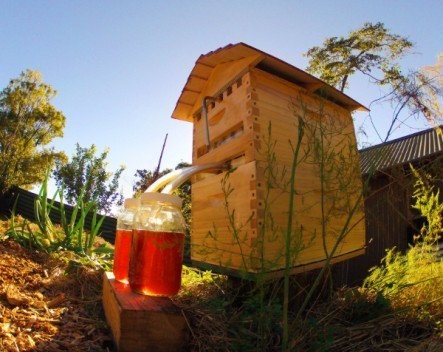 Aussie business Flow Hive has raised the most money ever on crowdfunding platform Indiegogo.

Entrepreneur reports father-and-son entrepreneurs Stuart and Cedar Anderson now have the most funded project in the platform’s history, raking in $US5.3 million ($6.91 million).

The Andersons created a system which allows beekeepers to harvest honey on tap, without disturbing the hive.

After a decade of research and development, the duo launched their business, Flow Hive, on Indiegogo two weeks ago with an initial target of $US70,000 in 42 days. It took just 477 seconds for the Andersons to reach their goal.

The first 500 beehives, priced at $US600 each, sold out within an hour and the father and son hit the $US1 million mark in a record three hours.

The Anderson’s decision to switch from Australian platform Kickstarter to US platform Indiegogo appears to have been validated by the high amount of investment from the United States in Flow Hive.

Stuart Anderson said in a statement he has been thrilled and a little shocked by the response.

“We’re just so grateful for all the support,” he said.

“The aim of this has always been to make things less stressful for the bees and easier on the beekeeper. Now things are on a much bigger scale.

Anderson said Flow Hive is working hard to fulfil its commitments to its Indiegogo supporters as quickly as possible.

“There’s a lot to do, but we’re completely confident that we will meet our pledge as our supporters have met theirs,” he said.

Andrew Ward, director of the Crowdfunding Institute of Australia and Crowd Sourced Equity Funding Australia, told SmartCompany Flow Hive’s success was likely to encourage other businesses to consider crowdfunding as a funding option.

“Yes, I think if they have a popular business to consumer offering, then success like Flow Hive has had is more attractive than seeking angel investors,” he says.

“There is significantly less cost in building a prototype and putting a video campaign together. At the end of it you have the money plus a committed fanbase who will keep the business going.”

But Ward cautions crowdfunding is not the solution for all businesses.

“With business to consumer services and business to business crowdfunding the jury is still out, they haven’t had anywhere near the same success as smart products.”