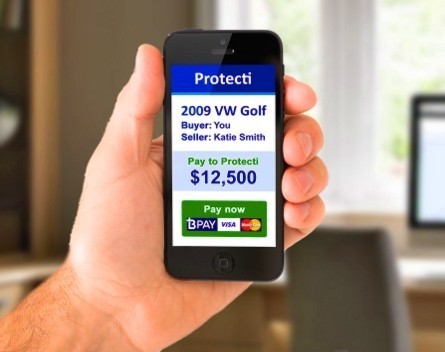 A Melbourne-based startup is on a mission to make it just as secure and convenient for people to buy ‘big ticket’ items online as it is to make smaller purchases.

Protecti founder Simon Lenton told StartupSmart the idea for the business came from a mixture of personal experiences and a general observation of where the online market is heading.

“What we’ve noticed is that people are putting their faith into online classified sites more than they ever have in the past,” he says. “And not just from small items… now people are listing cars and big assets.”

One of Lenton’s family members and a close friend both lost significant amounts of money after buying items online that didn’t actually exist. This resulted in the entrepreneur looking for a way to solve the sick feeling resulting from not knowing whether something you paid for online will ever arrive.

When asked what sets the startup apart from providers such as PayPal, Lenton says Protecti is different because it puts the power back into the buyer’s hands.

“What we do is actually hold it [the funds] until the buyer actually gives us the go-ahead to release it,” he says. “What we do is slow down the process — there’s an extra security step there.”

Lenton says there is little need for consumers to use Protecti if they are buying small items from reputable sites. Instead, the startup is targeting those who are making larger purchases such as cars.

“We’re effectively setting ourselves up to be a bank cheque replacement service,” Lenton says.

“We’re targeting those transactions where there is already a huge level of inconvenience with how they’re paying now, and we’re streamlining that so it can all be done online.”

Protecti has processed almost $2 million in transactions since launching in July and is in negotiations with a large public company in South Africa that wants to license the startup’s software for the local market. However, Lenton says the primary focus for the moment will be Australia.

“We want to really make sure it takes off in Australia,” he says. “But the best way that we are going to expand is some sort of strategic partnership with an entity that has the reach to make us ubiquitous as quickly as possible.”