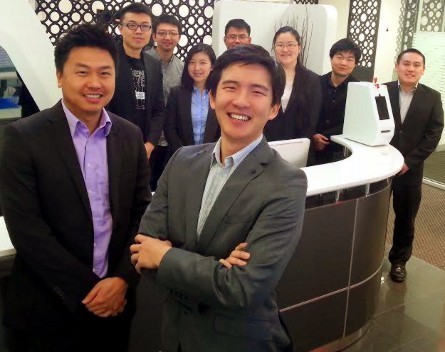 Bitcoin Group, the entity behind Melbourne-based bitcoin arbitrage fund Bitcoins Reserve, is set to list on the ASX next month.

The company wants to raise $20 million at 20 cents a share, as it looks to capitalise on short-term gains from its arbitrage fund and “medium-term” profits from bitcoin mining.

Bitcoin Group co-founder Sam Lee has been in China recently negotiating with investors who have recently cashed out of Alibaba’s initial public offering about the potential of coming on board post-listing. He says the company is being supported by a Chinese millionaire, who only wants to be known as Mr Gao, who is funding the company pre-listing.

“The short-term opportunity that we’ve capitalised on is the cryptocurrency arbitrage fund, but that will obviously have diminishing returns as more and more become involved,” Lee says.

“We see the medium-term objective being profiting through bitcoin mining, to support the network that will allow safe and secure payments and transactions.

“Over the next two years, the system is set to issue 1.3 million bitcoins per year and at current market value ($A446 per bitcoin) this is equivalent to a $580 million dollar per year opportunity.”

Lee says the Bitcoin Group wants to make up between 5-10% of the total bitcoin mining pool, but admits that number is speculative given the amount of variables involved in bitcoin mining.

The company will be following in the footsteps of DigitalBTC, an Australian bitcoin mining and digital currency trading company that listed on the ASX in March.

Exactly where Bitcoin Group sets up its operation is still up in the air, although the evidence points towards China. A number of factors will be taken into account when deciding where to set up, including power prices, the labour costs related to maintaining mining equipment, and proximity to mining equipment manufacturers. Lee says it’s likely that Bitcoin Group’s mining operation will be outside of Australia.

The group’s long-term goal is more ambitious, that is to ride on the coattails of bitcoin, which Lee says will eventually be a payments platform on par with Visa, MasterCard and American Express.

“The ultimate goal of bitcoin is to create a global payment network that people could utilise to do remittance, and also currency exchange through an unbanked system,” he says.

“This is essentially where bitcoin will really shine in the long run, and therefore the long term objective is to become a payment processor or gateway, just like Visa, MasterCard and American Express.”

Bitcoin Group is also funding a new co-working space in Melbourne and giving bitcoin startups the chance to use it for free until the end of the year. There’s a chance that it could invest in some of those startups in the future.

“To get to know a company well enough for us to invest in their operation, it requires a timeframe to get to know them, if they are to operate out of our space, then we’re able to fast-track our decision-making,” he says.