Bring Your Own Code hackathon competition offers $13,500 in prize money 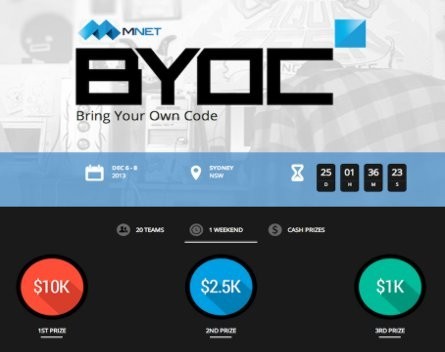 Australian mobile engagement company Mnet is offering $13,500 in prizes at its Bring Your Own Code hackathon competition in Sydney next week.

Joshua Barnard, Mnet’s technical operations manager, told StartupSmart the competition would provide a forum for coders to share their ideas and skills while spending the weekend creating a new app.

“We’re trying to reach out into the community,” he says, adding that they hoped to mentor entrants as well.

He says coders will be given a theme to focus on for their app at the start of the hackathon.

“We’re not trying to get a particular app made. We want to see what people are capable of.”

The competition, which is limited to 20 teams, starts at 6pm on December 6 and runs until 6pm on December 8 when entrants will pitch their apps to the judges. Unlike some hackathons where entrants work all through the night, Bring Your Own Code will give entrants a break between midnight and 8am.

Barnard says he hopes to see the competition rolled out around the country in the future.

“Maybe at the end of the day we’ll discover some great talent,” he says.

Entry and more information about the competition can be found here.