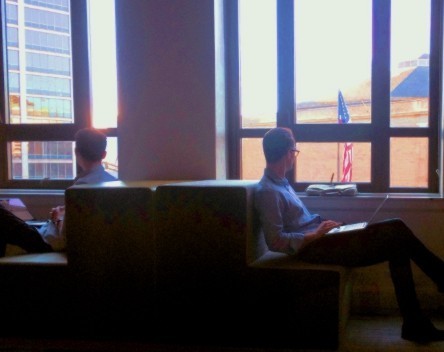 Build and they will come. Except everybody knows that’s not how it happens. It was the harsh reality for AngelCube’s 2014 intake that this was also the case for their San Francisco demo day.

Out of the 80 people that RSVPed for Friday night, there were only eight that rocked up, and not one of them investors. It’s not a dissimilar experience to many outsiders holding their demos here.

It was on Monday after they’d all regrouped following a tour of the Dropbox office, that their collective fustration was aired. But there was no backing away from the journey they had committed to make.

“This is the real world,” AngelCube founder Nathan Sampimon told the troops.

“In Australia you’re one of a few hundred startup companies launching this year.

“The reality here is that there are hundreds launching every day and it’s hard to cut through that noise.”

He encouraged the startups to spend the rest of their trip hustling as many meetings as they could.

“Warm intros are the best, leverage your network, those of our mentors and mine, but whatever you do, don’t stop,” he told them.

All the pitches on the night had delivered, many of them giving their best one yet.

Moodswing, a social network for people to share their emotions, had rewritten their pitch the night before to emphasise the impressive traction they’d had in just five weeks.

They managed to extract the most excitement from the small crowd, some of whom had taken the time to download and play with the Moodswing app.

“It’s a pretty cool design,” said someone on the night.

For Moodswing, the demo day had been seen as a pivotal part of their trip, aware that their likelihood of getting funding in Australia is limited. But lessons were learned.

“The demo day reinforced that we need to hustle ourselves and nobody is going to do it for us. It’s up to us, and us alone,” says Moodswing co-founder Jake McKeon.

Ediply, a concierge service for students looking to study abroad, had also spent the day before throwing out parts of their pitch, after getting some frank feedback. For them the lack of interest in the demo day did not affect how they feel about their product.

“The demo day was just part of what we had to do,” says Ediply chief executive Peter Chapman.

“The week in general has been beneficial. Just being here and being immersed in the culture around startups has been inspiring.

“Things can happen really quickly. We spent some time at Yammer, which has a pretty impressive office, and it was only a few years ago they won TC Disrupt.”

For Drop-In app cofounder Simon Rahme, which plans to monetise the last minute appointment market, there were no regrets.

“If it was easy everybody would be doing it.”

With that, everybody headed to a co-working spot for the day and got down to hustling.

Bronwen Clune is in San Francisco as a guest of AngelCube.