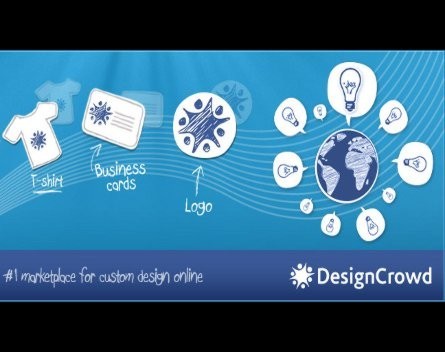 Crowdsourcing design marketplace DesignCrowd has this week announced it has hit $10 million in projects going through the site.

DesignCrowd.com.au allows users to upload design briefs and source hundreds of designs to choose from. The designer network includes over 132,000 designers.

The website was launched from founder and chief executive Alec Lynch’s family garage in 2008.

“The idea stemmed from problems that I could see in the traditional design industry. I could see from the outside that for businesses buying designs, it was slow, expensive and risky,” Lynch told StartupSmart, adding that the process for designing the London Olympics logo was informative.

“It cost half a million and took a year. Imagine if they’d run a design competition instead of going to an agency? They would have got thousands of applications, great press and a better result.”

In 2011, they received $3 million in venture capital from Starfish Ventures. In the last two years, their team has grown from three to 20 people, and they’ve launched the service in the UK, Canada and Asia, and acquired two US websites.

Lynch attributes the growth to the international expansion, traction around the working model and word-of-mouth marketing.

“The venture capital has supercharged the business and allowed us to expand internationally. Most of the growth has come from that and clients outside Australia,” Lynch says. “The model works and we’ve received a certain level of scale so we’ve reached a tipping point where there is a really good viral loop and word-of-mouth dynamic.”

Australia is the site’s second largest market, with 133% growth in demand from Australia in the last six months.

Clients pay some of the designers a participation rate, even if they aren’t successful. Rates are set by the client, and are most commonly $20 or $50 split between a few designers that didn’t win the project.

“There is no reason why crowdsourcing needs to be winner-takes-all. We think this is an improvement to the marketplace model. It’s better for designers and better for businesses,” Lynch says, adding that designers are ranked via an algorithm, with higher ranked designers getting paid more.

As the designer’s work is the key product of the service, Lynch says his team is committed to retaining the best designers available.

“The vanilla crowdsourcing model is completely open and allows designers to see each other’s work during the course of a contest. This can lead to copying and group-think. We keep the designs private during the contest stage, and this leads to a greater diversity of designs and no group-think,” he says.

The top five countries winning the design contests are India, US, Indonesia, UK, and the Philippines.

One of the American websites DesignCrowd acquired last year has been transformed into a stock logo selling site for the over two million unsuccessful designs pitched in the DesignCrowd contests.

With most of their sales are now coming from the US, Lynch says they’re looking to open an American office in the coming year. They’re also exploring options in Asia, South America and Europe.