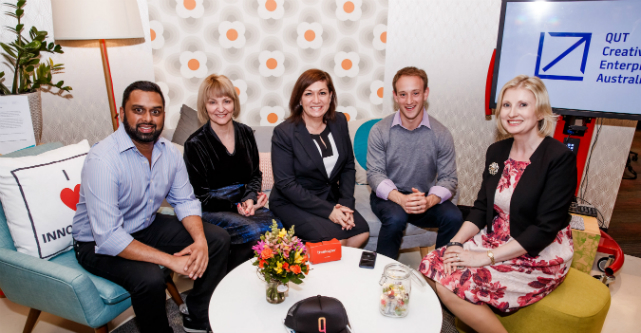 A fast-growing US startup pioneering tourism-focused virtual reality technology has set up shop in Queensland after being lured by a new initiative from the state government.

New York-based TimeLooper is the first international startup to take part in the Queensland government’s Hot DesQ program, with the startup receiving a $50,000 grant and a headquarters in QUT’s Creative Enterprise Australia (CEA) space.

TimeLooper offers a platform allowing users to experience and re-live moments in history through virtual reality technology, and is primarily used by tourists when visiting major landmarks.

The startup has raised nearly $US2 million after launching in February last year.

As part of the government’s program, TimeLooper had the choice of 13 approved “hosts” and eventually zeroed in on CEA.

“We’re obviously very passionate about supporting startups in the creative space. TimeLooper is at the cutting edge of VR and we’re looking forward to really helping them grow and accelerate in the APAC region.

“They felt that the ownership we have with QUT, the facilities and the community we have is a really good fit for where they want to take their business.”

TimeLooper COO Andrew Feinberg says that when the company was looking to expand beyond its London and New York office, the Queensland government’s offer was irresistible.

“When considering expansion we sought a market with a robust tourism ecosystem, rich pool of talent and proximity to the booming APAC region,” Feinberg says.

“Queensland provides each of the above in abundance and the Hot DesQ program does a wonderful job of bringing the pieces together in an attractive manner.

TimeLooper will be hosted at CEA for six months, where the startup also being provided with connections, access to mentors, co-working space and access to incubators.

But Rooke says the goal is for the relationship to last for much longer than just the allotted time.

“It’s not just about trying it out for six months and taking the grant,” she says.

“The intent of the program is to facilitate the first six months and take out the costs of relocating to another country and helping with where to find things.

“It’s trying to give that level of intense hand holding to make it as easy as possible. The intention is that they stay beyond those six months and grow their business here.”

“What’s really unique about it is that the local startup community helped co-design it with the government and looked at overseas models,” Rooke says.

“It’s a brilliant program. That’s a huge level of support for the startup and innovation community and it’s really targeted at helping startups to grow in Queensland.”

With the majority of international startups opting to establish an APAC presence from Sydney or Melbourne, she says one of the core aims of the program is to show that Queensland is a valid option too.

“The commitment through Advance Queensland is very much about changing peoples’ perceptions around naturally thinking that to build a scalable, globally-based business you have to be in Melbourne or Sydney,” Rooke says.

“There’s an overseas perception that we’re all about tourism here and this program really tackles that head on and provide companies with a great way of moving to Queensland with financial support and a local concierge service to help them network and get mentoring.”

TimeLooper has only been in the CEA based for a week, but Rooke says all the signs are positive so far.

“The feedback has been really amazing,” she says.

“The connections and business introductions they’ve had have been fantastic and surpassed their expectations.

“That’s really good feedback so early on and a good sign for how the six months will go.”