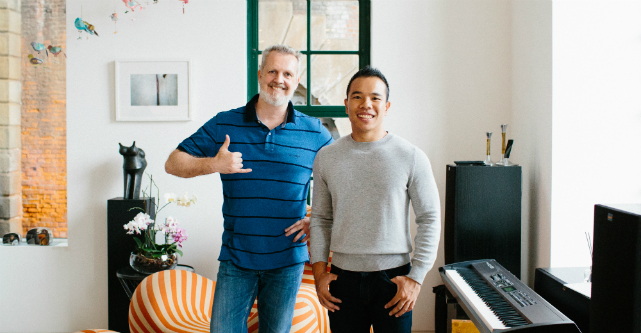 Google Maps co-founder and former Facebook executive Lars Rasmussen has signed on as an advisor and investor in LawAdvisor to guide the Melbourne startup through its next stage of rapid growth.

Rasmussen participated in a recent $1 million seed funding round in the legal-tech platform and will be an active advisor in the fast-growing startup.

LawAdvisor founder and CEO Brennan Ong says he came into contact with the prominent entrepreneur through a MaiTai global networking event in Perth.

“That network has proved to be a goldmine,” Ong tells StartupSmart.

“It has given exposure to the best minds in the world.”

After flying to London to speak at a legal innovation conference, Ong was connected to Rasmussen through a mutual contact that he met at the MaiTai event.

“I was invited to his house and had the opportunity to speak to him about what we’d achieved,” he says.

“He was very attracted to LawAdvisor’s mission to better disseminate legal knowledge and democratise law, as well as empowering lawyers with modern-day tools.”

He says that LawAdvisor’s case management service, which provides lawyers and their clients with tools for internal and external collaboration, was what got the deal over the line.

“He couldn’t get that out of his mind – that’s what won him over,” Ong says.

Rasmussen says he was also attracted to LawAdvisor’s mission to democratise legal services.

“LawAdvisor is a stellar innovation that will make a real difference to the world by empowering both consumers and businesses with a greater understanding about their legal rights,” Rasmussen says.

“Their vision to transform the legal profession by making it easier for everyday Australians to both access and work with lawyers is beyond exciting. I am thrilled and honoured to be advising Brennan and his incredible team.”

LawAdvisor aims to “democratise” legal services through an online platform connecting people and companies with verified lawyers, along with the cloud-based case management service.

After launching in July last year the platform now facilitates 20 legal consultations every day and has over 1000 lawyers signed up, while it still yet to flick the switch on any marketing.

With a solid base of users, Ong says it’s now all about scaling rapidly while using the knowledge of Rasmussen and the startup’s other advisors.

“We now have access to his technical genius – he has the knowledge, experience and creativity to take LawAdvisor to the next level,” he says.

“We’re pretty excited about the future. Getting the attention of the best minds in Silicon Valley has given us more confidence.

“We have the world’s smartest minds on board and we’ll be using them to our advantage to help us scale LawAdvisor.”

The seed funding round will be used to build out LawAdvisor’s offering to larger corporate clients and on planned expansions to London by the end of the year and Canada, Singapore and Hong Kong next year.

“Our future goal is to really attack the corporate space,” Ong says.

“Since we launched, corporate heavyweights have approached us to tailor LawAdvisor to service the corporate space.

“We’re really excited about that next stage of LawAdvisor.”

For other entrepreneurs, he says it’s important to push through the hard times until the opportunities start appearing.

“Keep up the confidence, keep your chin up and stay persistent and hungry,” Ong says.

“It’s a rollercoaster and you never really know when you’ll catch your lucky break.”