How a “complete surprise package” scored a $150,000 deal on Shark Tank 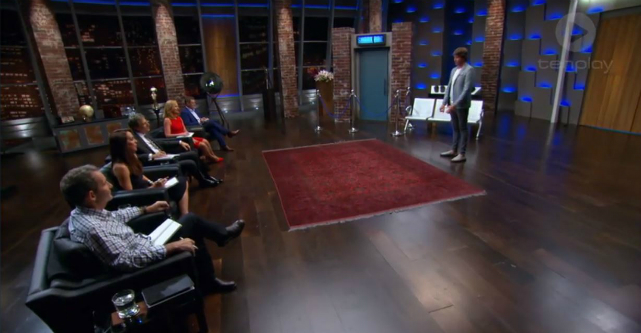 Emotions were running high during last night’s episode of Shark Tank, both for the sharks battling out to land investments and for two of entrepreneurs who failed to convince the judges to back their startup.

In the first Shark Tank episode to air on a Wednesday evening – the show having moved from its previous Sunday night broadcast spot – the sharks heard pitches from the founders of four businesses.

Two of the businesses walked out of the tank with deals but two businesses left empty-handed.

In one of the more unusual deals to be done in the Shark Tank, Boost Juice founder Janine Allis invested $150,000 in entrepreneur Matthew Gillett.

But 2Shu is not Gillett’s only business; he is also the one of the creators behind Maywood, a business that makes surfboards and t-shirts. He told the sharks he has plenty more design ideas up his sleeves too.

Concerned about a split focus among all of his business interests, Allis made an offer to Gillett that would see her take a 25% stake in all of his businesses, as well as his future ideas. And despite protestations from some of the other sharks, he agreed.

In a blog post published after the show aired, Allis described Gillett as a “complete surprise package”.

“Matt had past business experience, which he went into great detail during the pitch (remember, they go for over an hour sometimes),” Allis said.

“He has experience in the rag trade and in running his own business, he was creative, but was he too creative? I just was not sure whilst he was pitching and his mixed focus is a real problem for being a success.”

However, Allis said Gillett has “continued to impress” her in the months since the episode was filmed.

“We will be a good team as I will help to build business structure and disciplines that he will need to be able to grow his business and he has great ideas,” she said.

Also landing a deal in last night’s episode was Marc Berryman, the founder of Rhinohide, which manufactures panels that protect car exteriors from scratches.

Asking for an $80,000 investment for 10% of his business, Berryman failed to convince Allis and fellow shark Naomi Simson of the benefits of getting involved in the business.

However, he captured the interest of Andrew Banks, Steve Baxter and Glen Richards, who all made offers.

While Banks and Richards initially offered to invest in Rhinohide in exchange for a greater equity stake, Berryman agreed to a deal that would see both sharks each take a 10% in the business for $80,000 each.

One of the businesses to miss out on a deal in last night’s episode was car rental startup Carhood.

Carhood was seeking an investment of $500,000 for an 11% stake in the business, which rents out airport users’ cars while they are travelling.

But an earlier capital raise that valued the business significantly lower raised a red flag for the sharks, who also found it difficult to believe the business’ claim that its revenue could increase from $70,000 to $12 million in the space of three years.

It was enough to stop the sharks from investing – an emotional outcome for founders Steve Johnson and Christian Schaefer who said they’ve put everything they have on the line to get the business off the ground.

Perry Ormsby, founder of Orsmby Guitars, came closer to landing a deal but chose not to sign up to an agreement that would have involved repaying the value of the investment at a rate of 10% to the sharks, who would have also retained their shareholding after the money was paid back.

Boost Juice founder Janine Allis was interested and was prepared to offer Orsmby the $200,000 for a 10% stake, however, the offer would also involve her receiving a 10% return on the investment, while still retaining the shareholding.

The offer raised some eyebrows in the tank, with fellow shark Steve Baxter describing the offer as “shocking” and arguing if Allis believed enough in the business, she would be prepared to leave her money in the business.

Andrew Banks was prepared to offer the same terms as Allis but when Ormsby countered with an offer that would have reduced the sharks’ shareholding once the $200,000 was repaid, the negotiations came to an end.

In her blog post Allis said her offer would have been a “win-win for both parties” and “this deal may be the one that got away”.

“Perry’s business was good and he deserved someone giving him a deal but I needed to be creative,” Allis said.

“Most investors want three times their money in a business as it is high risk. My offer of a loan with a 10% return on my money and then holding equity in the business achieved exactly what he was looking for: cash and an ongoing partner.

“For my it achieved a return and still a stake in the business to help him drive.

“In the end Perry would have received money to grow AND a mentor-investor, which sometimes is worth more than the cash.”