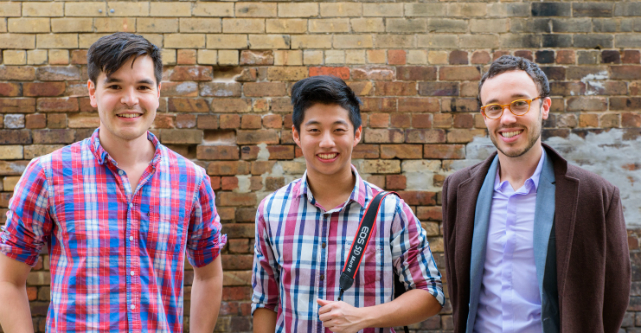 A Sydney on-demand photography startup has raised more than $200,000 in seed funding in less than a month, only 60 days since it was founded.

Snappr, a two-sided marketplace for professional photography services, hit its goal of $200,000 quickly and is set to close a seed funding round of “well over double” that aim, co-founder Matt Schiller says.

“It took us aback a bit,” Schiller tells StartupSmart.

“Within just 30 days a lot of people were really sold on the vision. Before we knew it we had a very sizable round.”

Passion and a fragmented market

The Snappr platform allows users to book professional, pre-vetted photographers on-demand, with the startup taking a 20% cut from all transactions.

Schiller says he and co-founder Ed Kearney have had the idea for Snappr floating around for a while and decided to act on it when the workload for their other startup, GownTown, became more manageable.

The overwhelming interest from investors is down to the co-founders’ passion and the potentially lucrative market that it’s operating in, Schiller says.

“On-demand stuff has now reached a tipping point in large parts thanks to Uber,” he says.

“It’s really starting to become ubiquitous – your mum and dad use Uber, not just your friends.

“And sometimes getting photography services is more painful than getting a cab. It’s such a fragmented market and there’s no existing system or marketplace.”

He says all of the investors he pitched to were well aware of the problems in booking a photographer.

“The people who came on in this round were all people who had experienced this pain point,” Schiller says.

“I don’t think at any point in the last month did we have to explain the pain.”

A 60-day path to success

Snappr’s early success and rapid growth also comes down to its lean approach and quick approach to market, Schiller says.

“We built most of the MVP in the first week, that was one of the most intense weeks of my life,” he says.

“We launched on the Friday of the first week and over the weekend we started having some customers flow through from word-of-mouth around the office and on Facebook.”

In the second week, the team turned its attention to the other side of the platform.

“We posted on job ad and didn’t spend a cent and we got 500 professional photographers applying to be on the platform.”

The entrepreneur says this is proof that the lean approach works, and founders shouldn’t wait until they have the perfect product before presenting it to consumers.

“We’ve got all these grand plans in the world as far as feature lists for the eventual platform, and the great thing now is that you need to make compromises to do it quickly.

“We probably have 80% of the platform we want in the two weeks and that hasn’t stopped us from getting customers.

“Investors don’t want to necessarily see the perfect platform. They don’t want you to have been sitting in a dark corner for 6-12 months cutting code and not getting a single customer. As long as they see you’ve got the vision for that and a first-week answer to a problem they’ll find that much more encouraging.”

“Don’t start thinking about who the investors might be on the day you plan to start the round,” Schiller says.

“You want investors more than anything else to be someone that trusts you and someone you think of as trusted advisor.

“Many of the investors that came on board are people I’ve known and have been talking to for a long time. You need to be tapping into people who you have existing professional relationships”

The founders are now looking to close the seed round after securing enough to tide them over to a larger Series A round in the first half of next year.

“We need to balance that against not giving away too much equity in the early stage, and we’ve found a nice sweet spot there,” Schiller says.