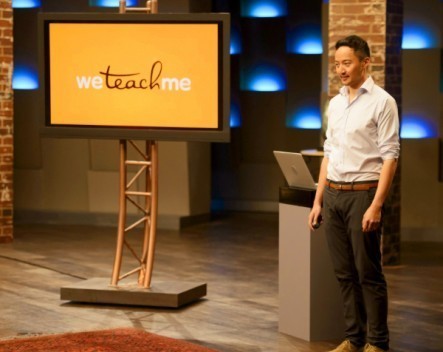 The co-founder of education marketplace WeTeachMe learnt a valuable lesson on Sunday night’s episode of Shark Tank: know your numbers.

Kym Huynh pitched his startup to the likes of Steve Baxter and RedBalloon founder Naomi Simson — seeking $200,000 in funding in exchange for a 2.5% stake in the company.

However the ‘sharks’ soon became sceptical after Huynh didn’t know the startup’s quarterly results or revenue for the previous month.

“You must know the figure,” Baxter told him.

“You’re not giving the figure which means you mustn’t know the figure — which is actually more worrying than not giving the right figure. You’ve come onto an investment forum where people want to invest and you can’t tell us what you’re selling. It’s a little disturbing if you don’t know.”

Eventually Huynh said the previous month’s revenue was $30,000. Janine Allis, the founder of Boost Juice, interjected and said the figure was “a guess”.

“See, you’ve lost all credibility in the number because you say ‘I don’t know’… now I don’t believe you,” she said.

We teach you how NOT to pitch to the Sharks #SharkTankAU

When asked why he didn’t know the numbers, Huynh said his co-founders were chasing deals in Melbourne and couldn’t be on the show with him. Naomi Simson said that particular answer “just told us we aren’t important”.

“You’ve come here looking for our address books and our knowledge and everything and you’re only prepared to give up 2.5% for $200,000,” she said.

“So I think you’ve come here to advertise, not really to look for investment. And for that reason I’m out.”

Another stumbling block during the pitch was Baxter’s observation that WeTeachMe had won Oxygen Ventures’ Big Pitch competition in 2014.

“If you’ve scared them off I’m probably going to get scared off as well,” he said.

Huynh said while the startup had not received investment from Oxygen Ventures as a result of winning the pitching competition – which saw $5 million in funding up for grabs – the company was “still in negotiations” with the venture capital firm.

Earlier this month Oxygen Ventures’ investment director Illya Frolov told StartupSmart the firm did not end up investing in WeTeachMe due to a “different alignment of which way the company was going to go in terms of growth”.

Speaking to StartupSmart this morning, Huynh said the episode had been filmed in December last year and as a result there was a lot of confusion on social media last night.

“There’s definitely a lot of valuable lessons we learnt from the experience and everyone has to start somewhere,” he says.

“The actual episode itself did show a lot of editing because the filming took place over three hours, so there was a lot of cut-and-paste. But I didn’t mind what was on air, although I was a bit taken aback by the reaction on social media… it did feel like bullying.”

I think he was glad the Cricket was on tonight ! @sharktankau #sharktankau

Huynh says as a founder you have to “wear multiple hats” and last night showed a particular knowledge gap that he had since taken steps to amend.

“We have a few big announcements to make in the coming weeks,” he says.

“We’re not allowed to release information at this time but after Shark Tank there have been significant developments with the company.”

“Know your numbers,” he says.

“Don’t walk in and talk to your investor without knowing your sales numbers. And don’t hide anything. It will be discovered during due diligence.”