Launch a start-up like a rock band at SXSW 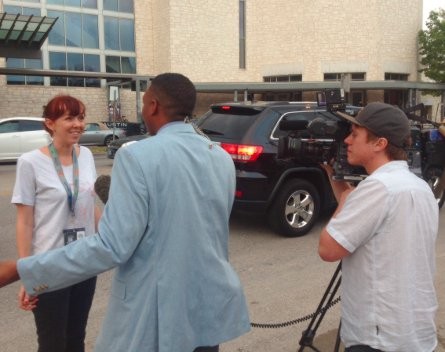 Most of the artists I represented were successful in Australia, but the big dream was to crack America. And the best place to launch a band is the SXSW festival in Austin, Texas.

Each March, the world’s industry and media influencers assemble there to discover the Next Big Thing. The challenge of launching a band at SXSW is the competition: thousands of others have the same idea. There’s noise everywhere and you are operating with limited cash and resources.

Between 2003 and 2010, I went to SXSW four times; each visit launched a different artist. My job was to set up a stunning show – the best sound, lights and vibe – and ensure it was packed with influential people, folks who’d write about the band or sign them to a record deal. Each trip cost the artist a wad of money, so I had to work out how to make an impact cheaply.

This year I’m back at SXSW, launching our internet company and app. I applied many of the tactics I learned in music, and we had amazing success at securing media coverage and traction. I can safely say that Posse is one of the ‘buzzing’ companies people are talking about after the conference. Check out this Best of SXSW wrap up in AdAge.

Here are six tricks I learned in music that I used to launch Posse at SXSW this week on a budget:

1. Get influential people talking about you before the festival

In music, we focused on being heard by high profile producers: these guys are great talkers and they aren’t pitched every day.

For the Posse launch, we worked out which US tech influencers love SXSW and asked them to share their five favourite places to eat, drink and shop in Austin. Everyone likes to share places they’ve discovered; it was easy to get the lists.

We secured big names like Elspeth Rountree (NBC and Fox), Maya Baratz (ABC News) and David Tisch (Boxgroup), asking them to contribute, and turned it into a ‘Tech Elite’s Guide to Austin’. We published the map on our site and distributed printed copies around the festival.

We posted blogs featuring the list of a different influencer daily in the two weeks leading up to Austin, all of which were retweeted by the featured people themselves, their businesses, media and the retailers they recommended. There was already demand for the complete map when we published it the day the festival started.

Bands save releasing records until right before SXSW. Every company has an interesting story to tell – the kind that could be covered in TechCrunch or Pando Daily. When something awesome happens (like you release an app or secure a round of funding), don’t write a press release straight away.

We saved our app launch and funding announcement so we could land a major press story right on the eve of SXSW. We offered an exclusive to TechCrunch, which ran this awesome article. This meant Posse was top of mind for any other tech reporters covering the festival, as everyone reads TechCrunch.

3. Guerrilla marketing works – but you have to be clever

Every pole in downtown Austin is covered by 9am each morning. Big companies spend thousands designing and printing fancy-looking posters and then hiring people to cover the poles.

The most effective posters are simple, and if you’re on a low budget like us, you must find a way to stand out.

Today, plain blue posters all over town say ‘Where is Biffy Clyro?’ They had a lot of people talking. It’s a conversation starter: ‘What ever did happen to Biffy Clyro? I wonder if he’s here?’

We ran a super-effective campaign promoting our Austin Map. The notices were designed like handmade ‘Lost’ posters, and then we found the ugliest and funniest looking animals we could and put them in the middle with a prompt for people to find the best places to eat, drink and shop at Posse’s Insider’s Guide to Austin.

We printed 100 posters at the UPS store and stuck them up ourselves the next morning at 7am. By 10am everyone was talking about the posters and we were even mentioned in Mashable.