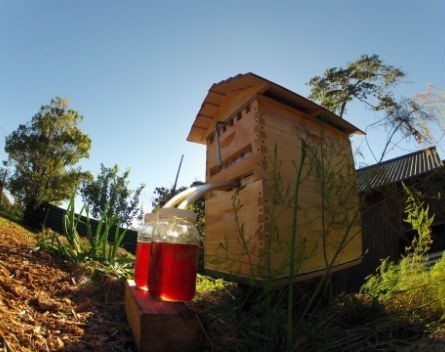 An Indiegogo campaign for a beehive that allows beekeepers to harvest honey simply by turning a tap has become one of Australia’s most successful crowdfunding campaigns.

That puts it ahead of the Kickstarter campaigns of Australian startups LiFX, which raised $1.3 million for its smart light bulbs, Ninja Blocks’s Ninja Sphere which raised $700,00, and 5 Lives Studios which raised £461,000 for PC game Satellite Reign.

Traditional honey harvesting is quite labour intensive. Beekeepers need to don protective gear, use smoke to sedate the bees, and crack open the hive, which requires a lot of heavy lifting. Then they’d need to pull the frames out, brush the bees off the combs, transport the frames to a processing shed, cut the wax off each frame, and place them in an extractor. Finally any dead bees or leftover wax needs to be filtered from the honey and the frames then must be returned to the hives.

Flow Hive allows beekeepers to install a tap on their hives, and use that tap to filter honey directly out of the hive. Special combs allow the honey to drain from the hive, without disturbing the bees and completely eliminating the traditional labour intensive process of harvesting.

Cedar and Stuart spent the past 10 years developing Flow Hive, and the last three testing prototypes. Backers have already ordered over 1700 complete full Flow Hives at $US600 each.

Cedar told SmartCompany the Flow Hive team are absolutely astounded by the reaction to the crowdfunding campaign.

“After all these years of working on it you just can’t anticipate it,” he says.

“This means we will be very busy and we will be employing the best help we can to deliver the hives to all our amazing supporters.”