Funding, How I Did It, Local, Management 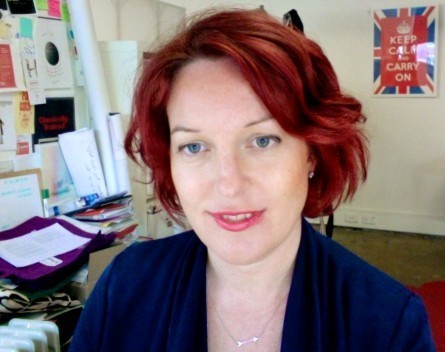 For AngelCube’s Brandspot team, who aim to be the ultimate service for brand assets, their trip to San Francisco and New York has been eye-opening.

“We’re not drinking the Kool-Aid, but we’re taking a sip,” says co-founder Amanda Watts, a designer, who along with Kate Lanyon, a developer, are the first all-female team to have gone through AngelCube’s program.

Brandspot took part in TechCrunch Disrupt, where they had a display in Startup Alley, which proved a success in driving sign-ups and interest. Their product acts as a “spot” for all company brand assets so they can be easily shared in a number of formats internally and externally.

“Our product was a perfect fit for the crowd because almost everyone there had experienced the pain point that we are trying to solve when trying to get business cards and banners printed in the lead up to Disrupt,” Watts says.

“Almost everyone said ‘we need that’ and we had about 80% conversion from the people we chatted to, who then signed up to the service.”

They’ve got some big name companies now trialling the product, which has led to a lot of helpful feedback.

“The great thing about San Francisco is that almost everyone you meet is doing a startup, so they’re open to hearing about yours,” Watts says. “We’ve found that even in New York that vibe is different – not everyone here wants to hear about that.”

The team’s strategy in the US has been to go to every meetup they can and get signups, meet people and leverage connections, aiming for female-focused groups at first: “Because we’re two awesome chicks solving a big problem, who get who we are and where we are going,” says Watts.

The strategy for the most part has been working.

“Somehow we’ve managed to successfully sell ourselves,” she says.

The pair are looking for $500,000 in funding, but are very clear that they are more interested in finding the right investors to solidify their efforts and help them grow in the market.

“We want the right people involved in helping develop our product,” says Watts. “For us, the right mentoring and advisory is just as important as the money. We want people who get our vision and understand the problem we’re solving”

The experience also led them to consider relocating to San Francisco.

“This is where the best people are, and being surrounded by that makes you push yourself harder,” Watts says.

“Both Kate and I both had great careers, but we’re not the kind to sit around and just be happy with that, we wanted to take a risk and do something important – we feel we’re solving a very real problem for businesses,” she says.