Funding, How I Did It, Legal 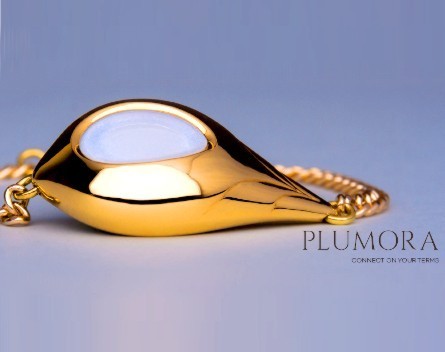 A Melbourne-based startup is looking to make wearable technology more comfortable and design-focused, and in doing so making gadgets better suited to professional women.

Plumora, which markets itself as a sophisticated and elegant piece of jewellery, connects to a user’s smartphone via iOS or Android app – allowing them to receive alerts for calls, texts, messages and calendar notifications.

The bracelet alerts users through a soft vibration and a subtle, coloured glow. The bracelet has a battery life of up to three days depending on the frequency of notifications.

Founder Aakanksha Chhikara told StartupSmart the idea for the product came to her while working in a tech company and always trying to catch up on missed phone calls despite having a smartphone and a variety of apps at her disposal.

To complicate matters further, she says women’s business attire often doesn’t have pockets – which means women always have to hold their smartphone in their hands or leave it on their desk or in their handbag.

When shopping around for a solution, Chhikara says nothing in the wearable tech space really appealed to her.

“They looked like gadgets and weren’t really something that style-conscious women would want to wear in the workplace,” she says.

“In corporate environments you have to dress really well. The more women I talked to about it the more I was convinced that women really needed a product like this.”

Chhikara says she has spent a year on the Plumora prototype, completely self-funded. She launched an Indiegogo campaign today with the goal of raising $250,000 to release the first batch of bracelets and have them shipped by autumn next year.

“Based on the response on Indiegogo we’ll be seeking investment as well,” she says.

“The crowdfunding campaign is also a great way to get feedback. About two weeks into it we’ll have a pretty good idea what our backers will think, what questions are raised.”

Chhikara says there is a huge potential for wearable technology to cater to the wider public, particularly when it comes to women and products that can be worn both in and outside the workplace.

“It could be the greatest technology but if they don’t wear it, it defeats the purpose entirely,” she says.

Chhikara says the Plumora bracelet also allows users to customise their notifications in order to allow them to “unplug”.

“All the products at the moment are promoting constant connectivity,” she says.

“Plumora is about selective connectivity. So you choose how connected you want to be, what is most important to you. It’s about reducing unnecessary distractions while having piece of mind that you will receive important communications.”

The Plumora bracelet will be available in both yellow and white gold, with its retail price starting at $300.