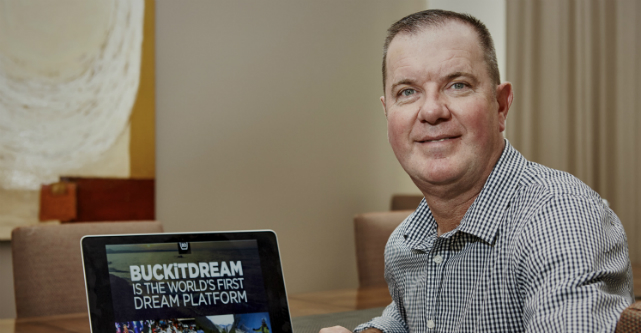 Melbourne startup BUCKiTDREAM has secured a $1.3 million ($US1 million) investment from member-based investment vehicle Investible as it looks to scale its dream fulfilment platform around the world.

It brings the total investment in the platform, which allows users to create a bucket list and then connects them with merchants to achieve these dreams, to $9.3 million ($US7 million).

Investible co-founder and serial entrepreneur Trevor Folsom was previously a seed funder of the startup and then introduced Investible members to it, BUCKiTDREAM founder Tim Carroll says.

“The stars aligned and Investible came and sat down with us and looked at where we’re going and got pretty excited about it all,” Carroll tells StartupSmart.

“We presented to their private members and they unanimously said that let’s invest in BUCKiTDREAM. To have exposure to 20-30 private investors all under the Investible umbrella was electric.”

In April last year the Aussie-founded startup teamed up with the Ellen DeGeneres Show to allow one lucky winner the chance to play a game with the prominent talk-show host. Ellen then invited her viewers to join the platform and enter a competition to win $US20,000 in cash to make their wish come true.

The platform now has 100,000 users on the platform, with the “buying intention data” they are providing via bucket lists creating lucrative opportunities for brands and advertisers, Carroll says.

“In its simplicity we’ve built a platform allowing consumers to create and fulfil dreams,” he says.

“People are creating 10,20 or 100 reams, and these dreams are not fuzzy, they’re very specific future intention data and that’s attracting big interest from US media, brands and merchants. Our ultimate destination is to build out a platform that connects dreamers with merchants.

“We will be making some major announcements over the next 12 months and the response by US media and brands has been fantastic – they love it.”

BUCKiTDREAM is now primarily based in the US, with Carroll making 50 trips to the US recently to help build it, but still has strong roots in Australia.

“Even though we’re a US corporation we are powered by Australian DNA,” Carroll says.

“It’s pretty hard for an Australian startup to go to America and have a crack, but we’ve successfully done that and the validation we’ve got for what we’ve created and where we’re going has been brilliant.”

Carroll says the goal has always been for the company to be global, and with the further investment it’s ready to quickly expand.

“We decided from day one we were going to be a global company,” he says.

“That’s an audacious vision but it’s possible with hard work and persistence. A determination to realise our vision has got us to here and it’s a very exciting stage.”

Despite raising $US7 million to date, Carroll says he has been forced to reject large amounts of funding because the investor wasn’t the right fit for the tech company.

“We really do our own due diligence on the investor and we look for a fit, for the right behaviour and for a shared vision for what we’re trying to do,” he says.

“When it comes to investment it’s really important for entrepreneurs to do due diligence on prospective investors.

“If we don’t get that level of comfort we reject the investor, and that surprises some people. There’s been $2 million of prospective investment around the world that we’ve rejected.”