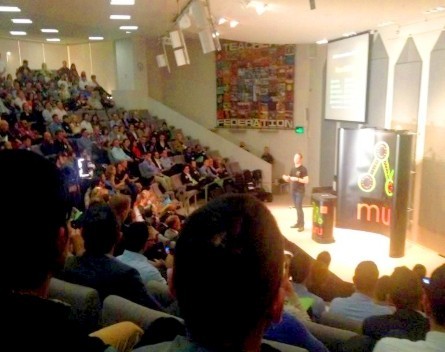 There were supposed to be just nine pitches at the Telstra-backed Muru-D accelerator’s demo night, but in reality there were many more.

The official pitches from all nine founders were very polished, and all nine were able to show evidence of traction.

While the pitch event was the centrepiece of the evening, that’s not where the selling ended.

The convention centre at the NSW Teachers Federation in Sydney was full of startup figures from all over Australia, many of whom were, of course, investors. One of the Muru-D startup team members mentioned they could pick them out thanks to the red name tags they’d been given at the beginning of the evening.

A quick glance at the name tag and the startups team members would begin their informal mini-pitches, as the crowd flowed by, going from booth to booth. The attention of the crowd might not have been on these moments, but they were no less important than their founder’s formal pitches on the night.

The graduating batch of startups, now seeking further investment, hail from a wide range of industries. There’s Chatty Kidz, Momentum Cloud and Open Learning – all of whom offer new approaches to education.

Zed Technologies is moving x-rays to the cloud. Vistr is e-commerce software that helps small businesses manage cash flow, while Pixc helps small businesses sell their products online through an image editing service. Lime Rocket is bringing crowds of people together by offering games for live audiences via smartphones. Safesite is making construction sites safer with a mobile app that reports safety information to site supervisors. And finally there was Farmbot, which ensures farmers livestock don’t run out of water with a remote monitoring system.

While the startups were the focus, the night was also somewhat of a celebration of what the Muru-D program has achieved in its first year, as program co-founder Annie Parker explains.

“If you’d have said to us 10 months ago that we’d be sat here with such extraordinary stories and extraordinary progress from those nine teams, we’d have gone ‘oh my god are you kidding that’s insane’,” she says.

“I think the one thing that I would love to say to each of those teams is a massive thank you. 10 months ago this didn’t exist. The team didn’t exist. The brand didn’t exist. For those nine teams to take such a leap of faith and trust in the fact that we’d be able to help them on that journey. I’m hugely grateful to all of you.”

“We want to thank the teams, we’ve pushed them so hard from day one when we asked them what traction number they wanted to put on the screen tonight to wow everyone in the audience and get them screaming like crazy,” he says.

“So many of the teams have been able to achieve that. In six months they’ve built products, got sales, built advisory boards, got investments, we took them to the US to get some more sales and put together some amazing pitches.

“Yes all these companies are very early, in a long journey. I can guarantee you two things. If you do get involved you can have a big impact on these entrepreneurs and you’ll love every second of the journey.”

Applications for Muru-D’s next batch of companies are now open. Applications close September 15.

The author attended the event as a guest of Muru-D.