New software set to simplify and speed up bookkeeping 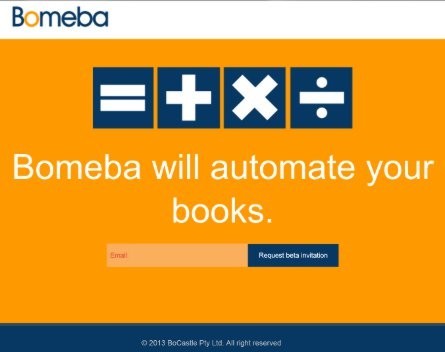 Australian start-up Bomeba has launched a beta service which it says will significantly cut the time start-up operators spend bookkeeping by automating the majority of the process without compromising on accuracy, verification and double-checking process.

Tim Stroh, founder of Bomeba, told StartupSmart he realised the need for a service like Bomeba several years ago. As a serial entrepreneur, he found bookkeeping ate up valuable hours in which he could have been working on core business and strategy.

“Bookkeeping is a tedious and repetitive hassle; I don’t even want to call it a task. It’s prone to mistakes because it’s entered by hand. I was convinced many years ago that it could be automated after I exited the last business I was in. It’s been my pet project since then,” says Stroh.

According to Stroh, over 80% of the bookkeeping tasks start-up operators do can be automated. Stroh’s software has been built to manage what he defines as the four tasks of bookkeepers: collecting and entering data, augmenting information (such as assigning relevant numbers), reconciling accounts and generating reports.

The key software function of Bomeba design is the ability to check or verifying the data is accurate.

“Bomeba is set to be really disruptive as it, by and large, does away with the need for a human bookkeeper through an inbuilt verification system,” says Stroh.

The software achieves this by focusing on the inherent relationships between numbers appearing on the documents processed during bookkeeping. The software uses a complex verification system to ensure the data entered is accurate.

For example, listed items on a receipt add up to a subtotal, plus a percentage of GST resulting in a total. If even a few of these values are entered incorrectly, the software can alert the business owner of issues and suggest the correct values.

Given the wide variety of possible documents needing to be processed, this has taken years to develop. Reports can be sent to the client, or directly reconciled with the client’s online accounting service.

Stroh is already in discussions with a variety of accounting software partners to roll out the product.

“We’ve got an existing integration using the APIs of a couple of systems. The intent is our original strategy was to take an agnostic system and integrate with everyone we can,” says Stroh, who adds one of the potential partners is pushing for exclusivity.

The partnership with ABBYY – which services primarily large companies but is looking to move into the SME market with products like Bomeba – has allowed Stroh to keep his business based in Melbourne despite some of the challenges this presents.

“Raising capital in Australia is hard work. ABBYY have made it clear they want to see this built locally. It’s a shame that so many tech companies are going abroad.

“It helps ABBYY is supportive of my hopes to stay in Melbourne, as my wife made it very clear I could go to the US to raise capital, but she and the kids were staying here!”