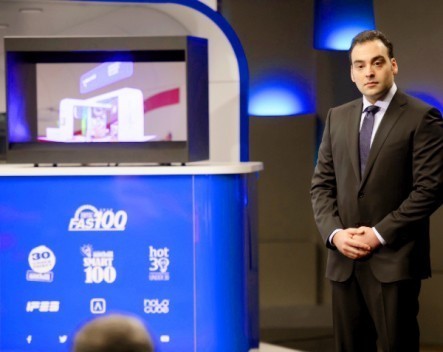 The founder of Expocentric, Stan Kruss, says it was easy to walk away from a $2 million investment offer from tech entrepreneur Steve Baxter, given it was tied to listing on the Australian Stock Exchange.

Kruss was made the offer on Channel 10’s Shark Tank, which aired on Sunday night. Expocentric designs, constructs and project manages modular Meccano-like exhibition stands for trade and consumer shows.

On the show, Kruss was seeking a $2 million investment in exchange for 10% equity, putting the startup’s valuation at $20 million. In the last financial year, the Expocentric posted $5.5 million in revenue and Kruss said he expected that to increase to $14.5 million this year.

His plan was to use the capital to help grow Expocentric to a point where it can grab the majority of the market share when Sydney’s Exhibition and Convention Centre opens in two years’ time. Using that momentum, he plans to scale globally.

Baxter told Kruss he was going about it the wrong way and said he believed Expocentric should list on the Australian Stock Exchange. Baxter offered $500,000 plus an additional $1.5 million contingent on Expocentric being listed on the ASX in the next 12 months, in exchange for what Kruss says amounted to about 12.8% equity.

“You can take this business and put it on the Australian Stock Exchange, it’s currently a fantastic market to raise on the ASX. So you could probably raise five million bucks if you list. That’s what you should be thinking about doing. That will get you set up for global growth,” Baxter told Kruss.

The week before appearing in front of Shark Tank investors, Kruss had lunch with iSentia chairman Doug Flynn, who had spoken about how it had taken 12 months and a great deal of his and his chief financial officers time to list. It was an opinion that helped confirm Kruss’ own thoughts that a listing in the next 12 months wasn’t the right move for the business.

Kruss says it’s a shame he and Baxter couldn’t come to terms. He says he knew valuing the startup at $20 million might have been seen as high, but wishes there was more negotiation. He would have been willing to accept $2 million in exchange for 20% equity, putting the company’s valuation at $10 million. He won’t continue to chase investment, instead choosing to focus on the company’s growth.

“Investment is not something I’m going to hunt for, we’re too busy growing,” Kruss says.

“We don’t need the cash; we’ve always been fine on our own. What we were seeking (on Shark Tank) is a mentor that can help alleviate some of the mistakes you make.”

Shark Tank appears on Channel 10 on Sunday night at 8pm.