PoweredLocal scores $125,000 investment valuing the Melbourne startup at more than $4.5 million less than a year after launch 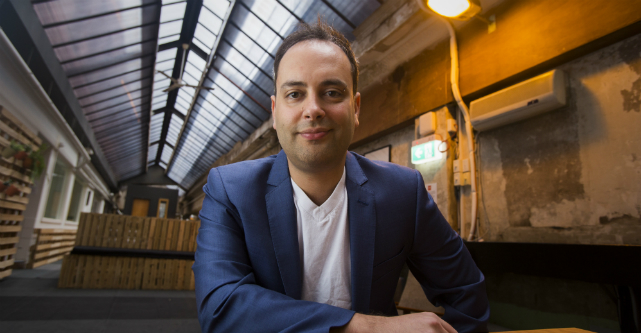 PoweredLocal gives businesses a WiFi connection which allows users to get a free internet connection in-store in exchange for checking-in to the venue on social media, in turn creating on-site data for the business and word-of-mouth marketing.

Clarke recently left his role at US booking powerhouse OpenTable to invest in startups, and this marks his first contribution to an Australian company.

The investor has chipped in $125,000 in exchange for 2.7% equity in the company, with the funding to be used to further expand the startup’s operations and further invest in the product.

PoweredLocal co-founder and CEO Michael Jankie says he wasn’t even on the hunt for funding when he and fellow co-founder Gary Tramer met with Clarke, who sold his company AS Digital to OpenTable in September last year in a multimillion dollar deal.

“We certainly didn’t go in looking to get some money – it was to make some introductions for us,” Jankie tells StartupSmart.

“We just sat down and from the first sip of coffee things just clicked. From the first moment we realised we were on to something that had really great potential and real global potential.

“He was asking all the right questions and he said the business has more potential than the one he just sold.”

Jankie says PoweredLocal has secured more than 300 partner venues in the last six months, and recently opened a new office with a team of five on the Gold Coast.

The startup’s platform offers a flat-rate monthly WiFi service for businesses to offer to customers in exchange for checking in on Facebook.

Jankie says this offers an easy way for businesses to gain useful on-site data of their customers.

“For all businesses, on-site data acquisition is really, really difficult,” he says.

“If you’re singularly owned, the owners are busy running their business and don’t have a lot of free time. For larger groups, achieving anything on-site is really tough. To walk around with anything more than a fishbowl to collect business cards is really hard to achieve.

“We’ve tapped into solving that problem. How do you do word-of-mouth automation? You check into the business on Facebook and build a big list of data. It opens up a simple way for anyone to add in marketing automation and to easily do nothing. You just give out the WiFi and people will trade that for checking in on Facebook.”

Clarke says PoweredLocal has the potential to be a global leader in this lucrative space.

“I’m looking for a product or service that’s going to provide value to consumers and businesses,” Clarke says.

“For businesses, customer data is incredibly important. It was one thing we tried to focus on in our systems at OpenTable, but we could only ever get one name – the booker – even though there could be eight other people at the table.

“PoweredLocal has developed a way to build a comprehensive customer database, a highly useful asset for businesses.”

“We don’t like that and we don’t agree with it,” he says.

“That’s really going after very detailed data. They’re less interested in any form of marketing and more interested in knowing if you’re swiping left or right on Tinder and what country your emails are coming from. I don’t think that sort of information is right to be gathering.

“It’s one thing to ask to check into the Wi-Fi and get an email address, and another to say ‘read these 16 pages of terms and conditions’ and then bury in there that you’re going to know who they’re banking with.

“These are competitors but they’re not focused on what we’re doing, which is promoting a business by word-of-mouth and building on-site data acquisition.”

Focus on running the business, not raising funds

He says that this latest funding round was secured when the PoweredLocal team was entirely focused on building a sustainable business rather than preparing pitch decks.

“Our business would not be as strong as it is today if we had decided to raise money instead of building the business. We would have been spending all of our time building investor docs and PowerPoint presentations rather than building a business.