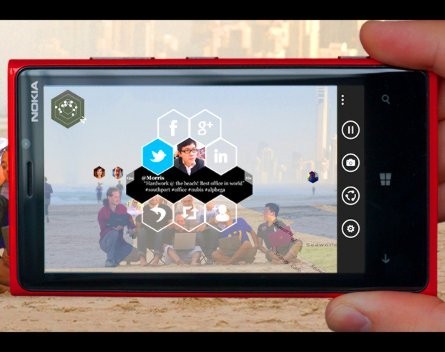 A new social app created by Australian start-up Nubis has scored €6000 ($A8300) in funding from a global mobile acceleration program based in Finland and funded by Microsoft and Nokia.

The Alphega app is an augmented reality social network aggregator. The app brings together social media updates relevant to location so the app users can discover new places and activities.

The app currently pulls in Twitter updates from people in the area, and also friends’ Facebook updates that are relevant to a particular area. The team at Nubis are working to connect the app to Google+ and LinkedIn.

George Slavov, one of the six co-founders, told StartupSmart they’ve been working on the app for three months, since they came up with the idea at a Microsoft Mobile Development Weekend.

“We were looking for something interesting that hadn’t been done before,” says Slavov, who says the original idea was just based on Twitter updates.

Nubis launched in February this year. The team had worked together for over two years for a larger company before it went into liquidation.

“We decided not to look for jobs but to keep the team together,” Slavov says. “We’re all IT people, about half are developers and the others are in infrastructure and networking.”

Slavov says the funding will enable the team to focus on developing the app, which they intend to launch in six to eight weeks.

“The funding was released in two lots, once when we were selected and the second will be when we deliver the app. This allows us to focus on building the app, rather than doing it in our free time. As a start-up, we were working on different projects to ensure cash flow,” says Slavov.

The team at Nubis is hoping the exposure for the app will drive sales once launched.

“If the app passes all the criteria it gets featured in the Microsoft shop and the exposure will be very valuable,” says Slavov.

The team has decided not to head to Finland for development assistance as they are quite far along in their development.