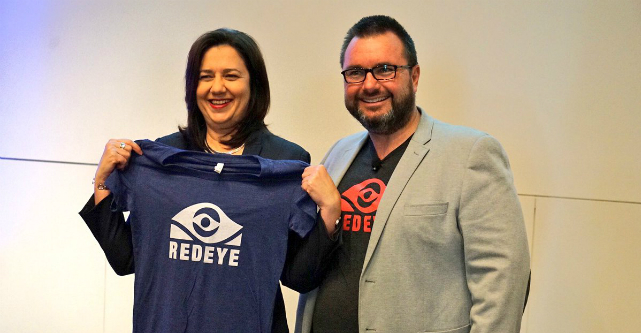 Queensland startup RedEye has scored a $250,000 state government grant to roll out its new workforce mobility software across Australia.

The grant comes from Queensland’s Ignite Awards Fund and the cash injection will be used to create five new jobs in the startup.

RedEye co-founder and CEO Wayne Gerard says that it’s further proof that the state government is putting its money where its mouth is and backing local tech companies.

“For us to attract the Premier to our conference is absolutely a testament to the government’s commitment to innovation,” Gerard tells StartupSmart.

“It was a really nice surprise that she announced the awarding of our grant too. It is huge validation.”

The Ignite Ideas Fund is part of the government’s broader Advance Queensland initiative and aims to provide funding to businesses to take their “innovative ideas to the next level”.

RedEye will be using the grant money to accelerate the roll out of its new workforce mobility solution RedEyeWFM, Gerard says.

“The global workforce mobility market is huge. The solution that we’ve got is really aligned to helping both large and small companies and it’s taking a different tack on it as well. We’ve opened up quite a unique market.”

“We’re directly tipping this grant money into jobs – it’s an exciting time to be creating new jobs in the sector.”

The tech startup has been building the prototype across the last year, which involved team members getting a view from the ground, he says.

“That makes sure that what we build is really relevant and allows us to get real-time engagement feedback.

“We’ve had our development teams out on-site doing jobs with one of our pilot clients. That’s a great opportunity for them to get first-hand experience of what it’s like to work in the field.

“That translates into functionality and user experience that generates value.”

It was this work with early adopters that helped RedEye to stand out from the pack when applying for the grant, Gerard says.

“What helped us to stand out was our application showed that we’re delivering clear business value to our clients,” he says.

“The testimonials they gave reinforced how our product is unique and helping to fill a gap.

“That clear market validation removes friction from the process of getting to market.”

He says more Australian startups should look at what grants are on offer and take the time to properly apply and then reap the benefits.

“It is a really great form of capital, and not diluting too early is really important,” Gerard says.

“It gives you runway you mightn’t have been able to fund otherwise.”