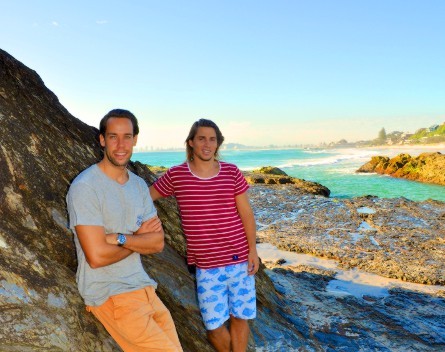 As surfwear retail giant Billabong struggles to secure a solid bid for its ailing business, a two-year-old start-up named Boardcave.com is slowly but surely shaking up the industry.

Founded by Ryan Mets, 26, and Chris Greben, 24, Boardcave.com markets and sells surfboards, which are custom-made by manufacturers across the country.

After receiving a $50,000 Commercialisation Australia grant, Boardcave.com was able to launch a patent pending technology dubbed The Board Engine, which helps customers find and customise surfboards at competitive prices.

The technology was used by more than 30,000 customers in the opening three months. And earlier this year, Boardcave was named Best Services Start-up at the 2013 StartupSmart Awards.

In the next six months, the business is looking to double its orders, although Greben is confident orders could triple or even quadruple.

Mets spoke to StartupSmart about the secrets behind Boardcave’s success:

Save a struggling industry

“I think one of the major things [that enabled Boardcave to secure a Commercialisation Australia grant] is we’re kind of targeting an industry that really does need help and it hasn’t really received much help,” Mets says.

“Myself and Chris – being online professionals and surfers – identified a massive opportunity in the industry… We’re exposing [surfboard manufacturers] to a national audience of surfers.

“This is a great opportunity for the surfing industry and I think that was made clear in our grant application – the national benefit.”

Mets says Boardcave deals with a physical, big-ticket item – a prospect many start-ups would shy away from.

“We see a lot of new innovative start-ups coming out that don’t come with the other series of challenges – of shipping large surfboards around Australia and insurance and logistics,” he says.

“That does separate us but I suppose in a way that’s a massive opportunity because no one really wants to deal with those challenges.”

Stay true to your target market

Mets is quick to point out that, while Boardcave has learnt from Billabong’s mistakes, they are very different businesses.

“We’re not relating ourselves in any way to Billabong. They’re a retailer and we’re really an online aggregator,” he says.

“We just feel that we’re a lot leaner and really plan to stay lean, and really evolve with things.

“The fact that we really identify with our core target audience – being board enthusiasts and actual surfers – [is a major strength].”

“Surfing is an iconic sport in Australia. It would be a shame to see it go down the drain because it’s not operating online,” Mets says.

“We definitely do play on it to some extent. Surfing is a favoured sport of many Australians – 2.4 million Australians surf or have an interest in surfing.”

Embed your story in the business

“In regards to our PR and things like that, and targeting national media, it’s been great, especially the fact that we’re young surfers and we’ve come from the corporate world,” Met says.

“I think it’s really, really important. Any really kind of unique aspect you can bring to your story as a start-up… is really helpful I think.

“The more interesting and relevant you can make it, depending on who you want to target, [the better].”

“Proof of concept was just to kind of identify that there were people searching for surfboards online,” Mets says.

“We went away and had many meetings… [We asked] a lot of the manufacturers to determine a business model that really wraps around their business.

“We needed our business model to be flexible enough and simple enough so that everyone could get access to the listings… We built the whole system and so on around the surfboard manufacturers.”

Get over age hang-ups

“We initially didn’t want to mention our age to anyone,” Mets says.

“I often will see other young entrepreneurs who have done something great. It’s really a talking point, especially with traditional kinds of businesses.

“I think we’ve put our money where our mouth is and built something that is unique. We’re at the stage now where age is really not important whatsoever.”